After a very generous friend gave me his RROD Xbox 360, I sat on it for a little while before taking it to a Play n Trade, who fixed it for $50. The $50 investment was well worth it, considering it was a free Xbox 360. Since I had a working system the only logical next step would be to acquire games!

After getting games such as: Grand Theft Auto IV, Fable 2, Saints Row, Project Gotham 4 and a handful of other games I decided it was time to get to playing! After a few weeks of playing I didn't notice any difference, as the guy at Play n Trade told me if its going to fail it usually fails within the months following the repair, and they gave me a return policy to reflect that. After the euphoria of the system wore off I used it off and on, mostly off, for the next 2 years.

When I was going through a lot of heavy anxiety I used my 360 quiet often and I was worried if it was going to fail it would fail then, but it didn't. So I once again packing it away for a few months, trading in the comforts of running people down in fast cars in GTA IV, in favor of the Goodwill Outlet store. Surprisingly enough, these two merged in the fact that I found a few things for the 360 at the Goodwill Outlet store.

The first thing I found was an official 360 controller, white, missing the battery pack. Later I found not only a loose battery pack, with Xbox hologram, but I also later found the charging cable. But those are packed away, so for the purpose of today's post I will be posting the 3 most recent pick ups for the 360 that I've found, including one very important tool that may save my 360's life.

After a while I decided it was time to pull out the 360 and check some of the things I found for it, mainly the controller. So I booted up GTA and went off into the world, when suddenly the screen turned into a rainbow and the system refused to respond. It was dead, again!

Well the 360 once more was packed in the box and put into the closet, fearing I would never use it again I decided to cut back on 360 finds, unless it was stuff I simply couldn't pass up. The first thing I found was a demo copy of MotoGP 2006, it was loose in a sleeve and I figured it wouldn't cost much so I may as well pick it up. I checked to make sure the disc was in good shape, which it was, so from there I just wanted my 360 to function so I could check it out! 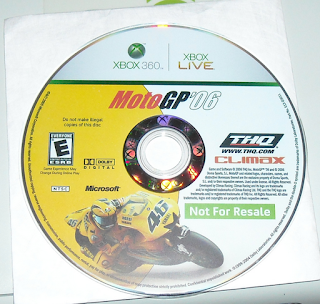 A few months passed before I found anything of value for the 360. It was an official Xbox 360 Chatpad, which happened to be black, matching the color of my main 360 controller. At this point I was pretty anxious to get the Xbox 360 running again, or at least hoping it would allow me to test the new stuff I found for it. 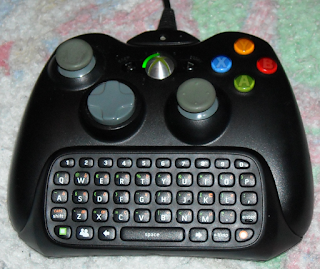 All my worries were pushed aside when I finally found what could possibly save the life of my Xbox 360. Hokey gimmick to some, perhaps, but worth picking up at $.79 per pound, in hopes it truly did what it claims. The Nyko Intercooler, supposedly makes your Xbox 360 run cooler, thus avoiding the RROD and overheating problems that plague the mass of original Xbox 360 systems. 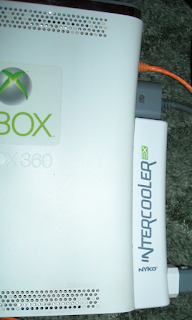 With the Intercooler attached I fired the system up, after a few updates and Microsoft hounding me about needing to be more secure I was up and running. The Chatpad works great, it even helped me sign into Xbox Live and confirm the new security measures. MotoGP '06 isn't as good as I thought it would be, lets just say it was a 2005 Xbox 360 game that used the A button to accelerate.

In the past I've found a handful of 360 games at the Goodwill Outlet, most of which turn out to be cracked or scratched beyond repair, otherwise these are the only 360 related items I've found within the bins. So far the Intercooler seems to be doing a good job, its SUPER loud and sucks air through the system like a Hoover. Sadly only time will tell when I will need to pack the system away for it's final rest, which I fear will be very soon, but it has given me at least the $50 investment to have it repaired worth of enjoyment.