Last year I spent the better part of an hour digging through a bin at the local Goodwill Outlet store searching for every last bit and piece of a shattered Nintendo Game Boy Color. I even wrote an article about it (here). For over a year the parts that I found sat inside a spare green GBC shell that I had. Everything needed to rebuild a functioning Game Boy Color was present, with the exception of the IR cover on the top and the fact that the tip of the power switch had snapped off.

After some testing I found that the system worked, yet some parts would need to be replaced. The screen was in great shape, it worked with both AC and battery power, the headphones worked but the speaker was rusty and weak. The speaker was a simple fix, because I had found the top screen portion of a DS Lite a few years prior, which was just a quick desolder and swap. The problem being, that didn't fix the weak audio coming from the speaker, the problem lies deeper, and still has yet to be addressed.

My main issue was that the system could never be a working Game Boy Color without figuring out a way to fix the power switch. The switch Nintendo used was a very thin slider switch, that obviously connected the correct points to turn the power off or on. The weird fact being it had to connect points C and 3 (referencing pic below) for the unit to turn on. A simple on/off mechanism would have worked, Nintendo! In fact, that's exactly how I repaired it.

After a year of trying to track down a replacement, I decided it was time to just bite the bullet and modify the thing to get it back into working condition. I have a small collection of on/off switches, which only require 2 points to be connected, as per any usual circuit. The trouble was actually finding out which 2 of the 4 points needed to be connected, which I found out were C and 3 by using tweezers and connecting the different points together.

After attempting to carefully remove the original switch, I end up just using a small pair of end snips and removed the switch in haste, which worked out better than I thought. After the switch was removed I tinned two small wires and soldered them to the correct points on the board. Lucky for my poor soldering skills, the other side of the neighboring chip didn't have any pins on the same side as the power switch. 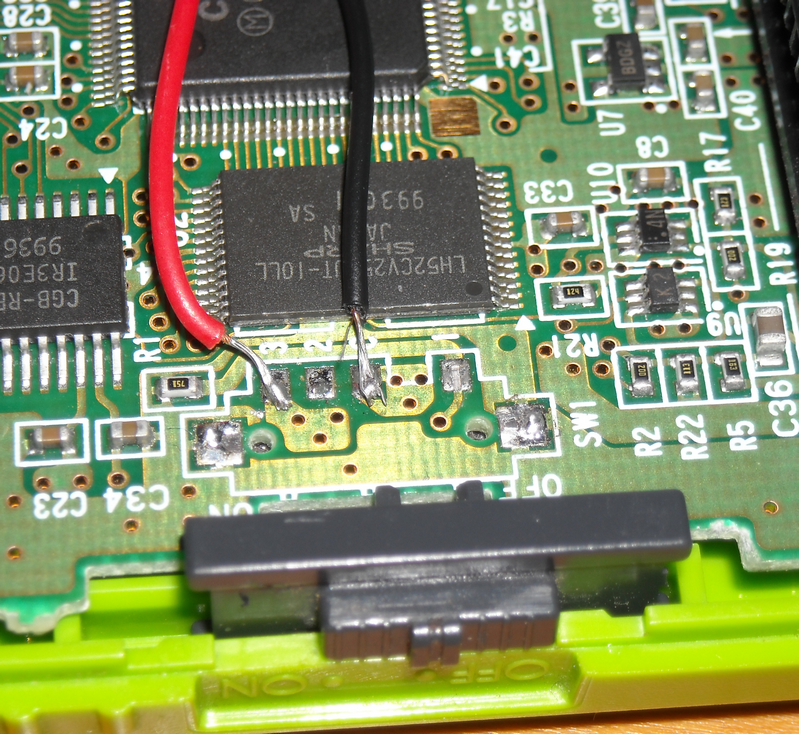 After the wires were soldered to the correct points, I tinned the other ends, added a little solder to pins on the switch and made the needed connections. A quick test showed that everything was a success, the Game Boy Color came to life and was now completely functional again.

Soldering up the switch was probably the easiest part of the whole project, what really took the most planning was figuring out where the new switch would go. I originally attempted to sandwich the shell together with the new switch where the old one used to be, but that didn't work. Then I remembered that I didn't have the IR cover for the very top of the shell, which gave me an idea.

The Infrared connection ports, from what I understand, was meant to be a wireless connection between 2 Game Boy Colors, much the same as the wired connector on the old DMG. The fact is, Nintendo also integrated an option to connect a wire, thus I don't need to keep the IR connection. So I desoldered the IR diodes and went to work clearing out space in the shell to make the new switch fit.

It didn't take much to desolder the IR diodes and set the switch in place. With a few snips of plastic here, a little double sided tape there, everything went into place quite well. Although I can screw the shell back together, it doesn't fit together as tightly as it originally did, but that doesn't bother me at all. 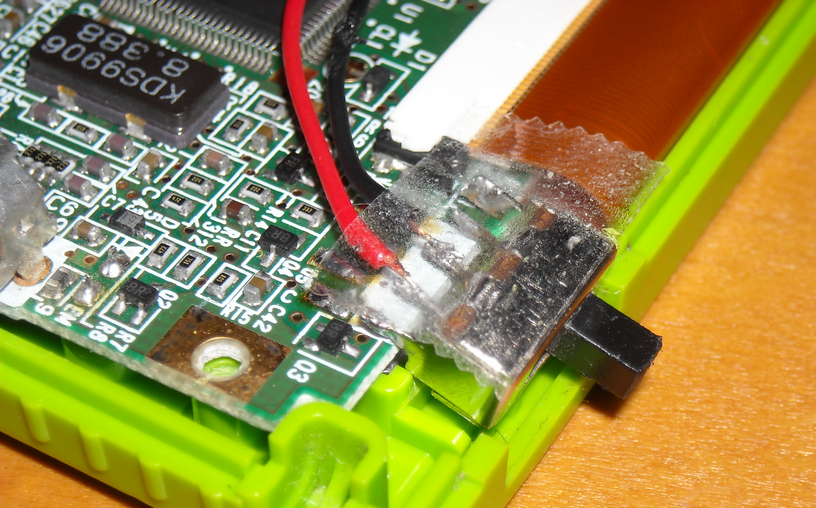 I wish I could have tracked down an original GBC power switch, but that would require me to cannibalize another GBC. This project sat far too long in my closet, so I'm pretty happy to have finally just taken control and thrown in a switch I had laying around. It's not perfect, the screen is scratched, the IR connection no longer functions and it has a weird switch, but otherwise it works perfectly and is a Game Boy Color I won't mind accidentally taking a tumble or getting scratched up.
Posted at 2:42 PM 2 comments