Since the original posting of this entry I have found both an angled cable and a much higher quality switch and installed them both. This has been quite a few months ago, but I'm only just now getting around to updating the post. Laziness!

Regardless the plastic switch just wasn't going to cut it, even for bedroom usage, it was just too weak. The original cable I used wasn't going to work because it stuck out like a sore thumb, and the angled cable is much better looking and out of the way. 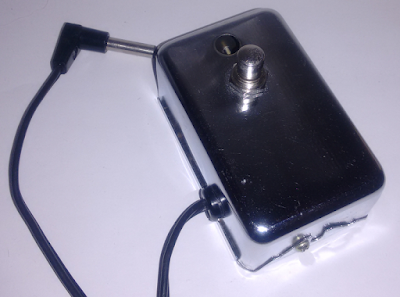 I'm pretty happy with the end results, with the exception that there is still a big hole in the pedal. Since the primary function is to switch between the channels, and it does that, I can't really complain about a homemade pedal that cost me around $2 total.


Sometimes it's not about saving money; it's about doing a project just to prove you can do it. And also a little about saving money. Either way today's project was super quick and super cheap. All the parts came from, you guessed it, the Goodwill outlet store. For about $1 I built myself a footswitch for my Fender Mustang Mini.

After I bought the amp I started testing to see how to setup a footswitch, which turned out to be far more simple than I ever imagined. A simple on/off switch would work, that's all the amp needed to go between both selectable channels. I already had a latching push switch so all I needed to do now was find a cable with 1/4" end and a housing to put everything into. 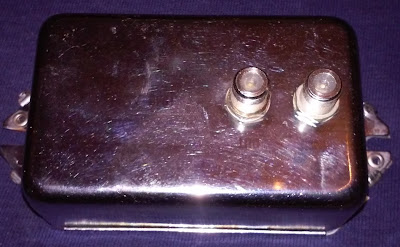 The housing began life as an Archer RF amplifier. The basic shape, even though it's significantly smaller, reminds me of a guitar effects pedal, so that's why I bought it. After a brisk steel wool rub down all the markings and the little bit of tarnish that had accumulated was removed. It may not look it in that picture, but it's a fairly mirror finish. 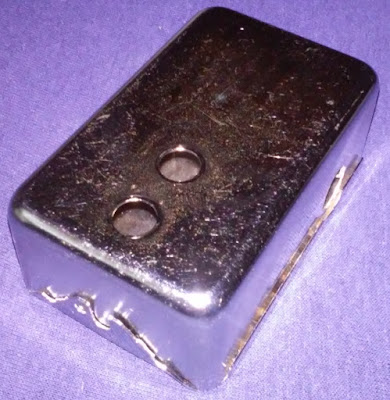 The next step was to eliminate the flares on either side that the Archer used to attach to wherever it was attached to. In what I can only call a sheer stroke of genius I folded the top flairs in and the bottom flairs up so the unit closes up tightly, as well as giving me two simple screw holes to keep the whole thing shut once it was all done. 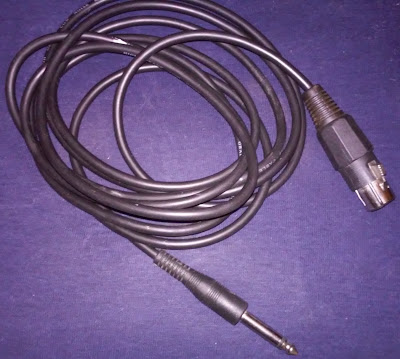 The next piece of the puzzle was the cable. I just so happened to find an XLR to mono 1/4" cable, which is honestly not going to be useful for microphones, so I decided to remove the XLR end and use it as the cable I needed. Nothing special, it's unbalanced and it wouldn't have been ideal for microphone use anyway.

Finally came the switch, which is nothing more than the only latching push switch I had at the moment. It's all plastic, it's all cheap but it all functions. All functions? WTF? Anyway, as the saying goes "If it works but looks stupid, it's not stupid.", or something like that.

After modifying the housing, again by folding the flairs, drilling some screw holes, making the switch hole bigger and removing all the lettering and tarnish, I was ready to put it all together. I simply put the switch in, slid the cable through the slightly modified wire restraint system that sticks out of the side of the box and soldered everything together. Easy peasy!

Admittedly, this isn't perfect but it was a quickly put together, and above all functional, project that I wanted to attempt. In the future I'm pretty sure I'll be changing the switch to a more heavy duty footswitch as well as swapping the cable to one with a 90 degree angle. This project also gave me the idea to buy more Archer boxes from the outlet store, when I see them, to use for future guitar pedal projects. I mean look at it, it's perfect for a guitar effects pedal! I would have to miniaturize the guts and find the right parts but I think that's totally a doable project. 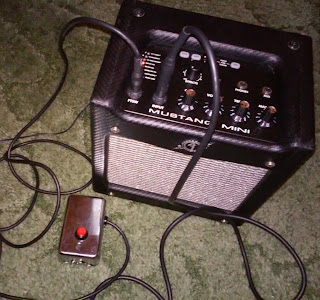 I know, I know! Today's technology far exceeds a 2gb flash drive. You can pick up 32gb flash drives at the dollar store these days! Why are you bothering to save a 2gb? Because I can, it's that simple.

Admittedly it's nothing special, I'm well aware, but this Duracell branded 2gb flash drive was something I had picked up from the outlet store a month ago. I love to pick up flash drives, because I love old technology and because I can always use more ways to quickly transfer files from one computer to the next. 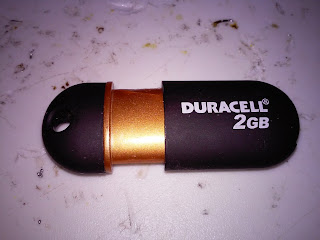 Upon getting this little booger home I noticed it didn't work at all. This is an extremely rare occurrence because I've found tons of flash drives and they all worked first try. I've found normal flash drives, promotional flash drives and even a 32gb flash drive. Once I find a flash drive from the outlet store I IMMEDIATELY format it. I'm not a pervert or a voyeur, plus you never know what you might find on these things.

Since this one didn't work I decide to just crack it open and see what was the matter. Carefully I pried the casing open and pulled the main board out to see the oscillation crystal was shorting itself out. After carefully realigning the legs I popped the bare board into the USB port and it sprang to life, with a rather cool blue LED no less. 1.91gb of the 2gb wasn't bad, I've seen 4gb flash drives with merely 2.8gb on them after formatting, so I was pretty excited. 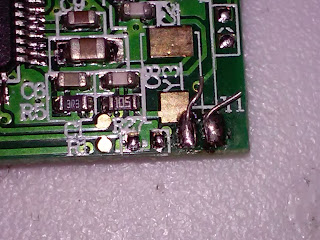 Not being fully happy with the way I had realigned the legs of the crystal I gave it one more try... and broke it... off the crystal! Nothing left to solder, no way to reattach it. It was done; it was dead. The only alternative was to find a replacement crystal, which I did!

After taking apart a pair of completely crap Vivitar HD camcorders I found the crystal I was needing. After a few short seconds of soldering the crystal back onto the flash drive, I plugged it into my computer and noticed it acting like it wanted to mount, but it didn't. Upon closer inspection I noticed a solder bridge between the two solder points, after I wiped that clear I attempted to mount the flash drive again. SUCCESS!!! 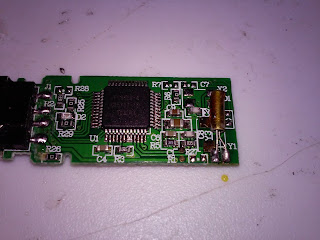 Again I know a 2gb flash drive is archaic to most of you, but I'm glad I could resurrect it. Even though it's 2gb I can still use it to transfer data from computer to computer, when I don't need something as big as a 32gb. This all makes perfect sense to me, and that's all that matters.
Posted at 10:50 PM 0 comments