Games the need a Sequel: Apex

In the heydays of the original Xbox the console seemed flooded with racing games, or games that included racing in some form or another. As a fan of racing games I tried my best to acquire as many of them as possible, as even then they were cheap and abundant. One game, however, stood out from the crowd, yet it's name was only spoken in almost unintelligible murmurs. That game's name is Apex.

What set Apex apart was that you took the reigns of a car company and built it from the ground up. What's not to love about finally being able to get your hands in on building the race cars you were going to be racing anyway? To answer that question simply, much of this game. Apex, in theory, is an amazing idea, but what was given to us really fell short of anything spectacular or mind-blowing, which I'm sure many racing game fans had hoped.

From the corner cutting tactics of car sales being strictly based on the results of your finishing position in races to the exceedingly limited and drab choices you have in car designs, Apex really missed the mark by quite a few miles. What fans really wanted to see was more inspired car designs, have more options on how to customize them and I'm sure have more control over the power plants placed within said cars. I'm also pretty certain fans wished the sales were based on some kind of constantly flowing sales system, like a stock market, rather than only when you race and only where you place style system.

The idea was an amazing one, although Apex wasn't the first to do this. Sega GT for the Dreamcast allowed the player to earn different ways to build their own race car, which offered far more options in customization as well as far better car designs and engine choices. Perhaps if Apex was the first game to have offered this style of gameplay it may have had a sequel already, so that we could see just how much better it could be.

Apex may have been a victim of being stuck between a rock and a better game, but I think Apex still deserves a sequel. Given the current generation of consoles, and the fact that racing game continue to be strong sellers, if done correctly Apex 2 could be a smashing success. Imagine having the option to mash together similarly styled cars of from the real world, such as cars we already see in GTA or the likes. Then you're allowed to decide whether it's front, mid or rear engine, front, rear or all wheel drive, and finish that off with a few miscellaneous details about the power of the engine and presto, a recipe for success!

Apex isn't overly horrible, but it's not as great as it truly could have been. Watching your business grow appeals to people, as is apparent by the popularity of business sims these days. In my honest opinion I think it just makes sense to make an Apex 2, the current gaming climate just feels right. I just hope if they do decide to, they take their time to make the game as good as it could have been, then polish the shit out of that thing and make it the masterpiece it should have been in the first place.
Posted at 9:24 PM 0 comments

Could it be true? Could it have finally happened? Did Nyko create a product that I could happily enjoy? Well, maybe.

A few weeks ago I was at, where else, the outlet store, when I found an Xbox 360 controller. I quickly chucked it into my bag and kept on hunting through the bins. Upon later inspection the thumb sticks were absolutely fucked, someone had carved their name into the side and the controller was no longer white, but a deep nicotine yellow. Needless to say I decided against buying it.

Immediately after I tossed the controller back into a bin I noticed that it had a rechargeable battery pack on the back. On closer inspection it turned out to be a Nyko battery pack, which sent chills down my spine. Even so, this time I was quite confident because I had a secret weapon on my side, the official Microsoft battery pack charging base! 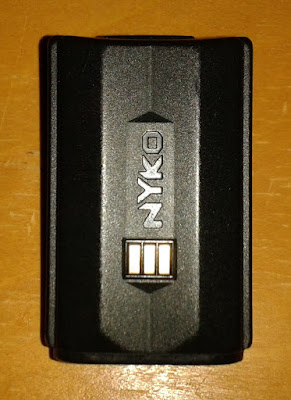 A few months prior I had bought an official battery pack charger because it was at the outlet store and I already owned an official Microsoft Xbox 360 rechargeable controller pack. The controller pack had been nothing but fussy when trying to recharge it through the cable that connects to the console, so I decided maybe this would help the battery pack.

Much to my surprise the battery pack seemed to take a long charge, lasted much longer than it ever had before, and seemed to hold a charge for weeks without even being used, where it would previously discharge rather quickly without being used. Could this charger help me revive a Nyko brand Xbox 360 battery pack? Well, maybe.

At first the battery pack didn't seem to have any life left it in; all signs of life were gone. I plugged it into the charging base and got nothing. I plugged it into the console with the recharging cable and also got nothing. It soon dawned on me that Nyko put their own special charging ports on the back of the battery pack, which was the key to a successful revival.

After working out the polarity I simply put some electricity through the positive and negative terminals on the back of the battery pack and once it was outputting roughly 1 volt I slapped it back into the Microsoft charging base. Would this work? Well, yes! Yes it did.

The official charging base turned red, meaning it was charging, and charged the battery for quite some time before turning green. I quickly put the Nyko battery back into my controller to test for life, and there it was... the green lights lit up, the controller synced and everything was right with the world.

So far the Nyko battery pack seems to work quite well with the official 360 charging base. The battery also seems to have quite a good life span. It's odd that Nyko made a product I'm actually half way proud to own, even if I had to bring it back to life by myself.
Posted at 1:14 AM 0 comments

Every time I walk through the doors of a thrift store I never know what I'm going to find, or if I'll find anything at all. This is a calculated risk that I take; to spend time waltzing through the aisles, searching high and low for things that pique my interest. Sometimes I find absolutely nothing, while other times the risk, although very minor, pays off in huge scores.

Same goes for the outlet store, which is more of an impulse driven risk. Digging through the bins gives me a euphoric feeling of treasure hunting, as well as finding treasure from under other people's noses. The risks taken at the outlet store are more "Should I buy this seemingly broken item?". Sometimes I buy things that seemingly don't work and once I get them home, clean them up and fix anything that may be wrong with them, they work just fine. In other cases I've wasted a few cents on complete and utter junk that I instantly regret, but such is the system of risk being a reward.

Over the years I've learned to draw the line of how far I am willing to go to pick up an item at the outlet store. It's a fine line, knowing to what degree of disrepair of said item will I accept or just toss back into the bin and pass up. Just a few weeks ago I passed up an iPod touch with a shattered screen. Sure, I could have bought it for less than ten cents, paid a small fortune to get the screen repaired and had myself an iPod Touch, but that wasn't a risk I was willing to take.

It all may sound silly, perhaps even stupid, but calculated risks in the hobby of thrift hunting are an everyday occurrence. Knowing how far you're willing to go to own an item, or part of an item, is something you need to figure out for yourself. My views on picking up items, parts and even completely useless junk are fairly liberal, but I do have my limits. Eventually you'll see that sometimes risk equals reward.
Posted at 10:00 PM 0 comments