Since I've owned my DOD YJM 308 for so long it began to make me wonder what an original grey DOD 250 sounded like in comparison. Now you can listen to all the youtube videos you want but it's not the same as having them side by side in your personal possession to compare. Since I wouldn't even know where to begin to find one to even borrow I decided I would try my hand at building a clone. I fully understand a clone isn't going to sound exactly like the original, but it should get me somewhere close.

The standard process begins with me looking through layouts online to find one I feel the most comfortable building. Next comes searching for all the parts to put the thing together, followed by cutting down the board and adding the parts, etc. etc. The day came when everything was done. I plugged the pedal in and.. silence. Nothing but pure, low-grade hum and absolutely nothing more. Since the bypass worked I knew it wasn't wired up completely wrong. After checking over it a few times I decided it was best to tear the build all the way back down to the board and test every single component. One at a time.

Since my work station is outside I had a few incidents while testing and rebuilding. First there was a gust of wind that blew some of the parts off the table I work on, losing them forever. Secondly, and this is how the pedal got its name, while doing some soldering I heard a rather loud thud on my table. When I looked up to see what it was, there was a large black wasp with a dead green caterpillar. Omen or miracle? Who knows, but as the original 250 was grey and the clipping on this is rather sharp, like a sting, I figured I would name my build the Grey Wasp. 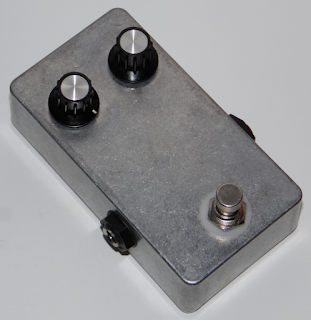 I have no clue what a real DOD 250 is going to sound like, but after I finally got this thing to work I was rather impressed with how it sounded more or less like the 308. My firm belief is the 308 was focused on helping fans of Yngwie get his tone through a single pedal, instead of being just another 250 pedal clone. If someone really wanted Yngwie's tone they would already own a 250, wouldn't they? Anyhow, since the Grey Wasp does sound fairly similar to the 308, I'll assume that means it sounds fairly close to a grey 250, and I'm ok with that.

The idea came to me while I was tearing down an old radio and found an NEC c4558c op-amp. I know the 4558 is mostly associated with the Maxon/Ibanez Tube Screamer, so I decided to google NEC c4558c to see whether it was the same or something completely different. Very few google results showed much connection between the NEC op-amp and the TS808, but the few that did yield something seem to indicate some TS808 units do have an NEC 4558 inside of them, and they seem to be fairly rare.

Now that I knew I could build a clone around this op-amp I set to work harvesting the parts from the radio to go around the op-amp. It's just a simple fact that parts degrade with use and time, so I figured if I wanted a vintage TS808 sound I should use the parts this op-amp was already familiar with. I would say I accomplished that for about 90% of the build overall. The other parts I got from other various boards I have laying around.

The layout I used came from Bitsbox.co.uk and their TS808 clone. I used slightly different transistors, so I can't say this is exactly like their kit, but it's probably fairly close. As I was far more comfortable with the Bazz Fuss or LBP-1 layouts I agonized over this build and took my time to make sure I got it right. I took a week carefully looking over boards I have to find the parts I needed to build this pedal, and another week doing things one step at a time to check, recheck, triple check and quadruple check everything to make sure I wasn't going to blow the op-amp once I put it into the sockets.

The day had come, I had finished the board and all that needed done was wiring everything up. I tend to enjoy wiring as I find it the simplest part of the build. The board was all together, the components were all installed inside the housing and all I needed to to was tin connections, tin some wire and solder things together. Even though it's usually a more relaxing experience this build almost broke me. I was so nervous about what could go wrong and trying to troubleshoot so many parts. I pressed on and soldered all the wires to where they needed to go.

I finished soldering up a ground wire for the housing and went to plug the pedal in and see whether it burst into flames or made some tubes scream. At first everything was working perfectly fine, until I engaged the pedal and go no sound at all. I was a bit disappointed, until I remembered that particular power supply has a short near the wall part. After fiddling with the adapter I finally got it to work. I twisted the knobs to see whether I had installed them correctly and the only problem I found was the tone was wired in backwards. Oops. A quick trip to the soldering station and swapping two wires remedied that.

Just to see if it made noise I tested it through my Fender Mustang Mini, but soon graduated to my Kalamazoo. The problem with the Kalamazoo is that it lacks any real tone control, so using the tube screamer sounded muddy with humbuckers. I then decided to test it out on big Bertha and while she is 20+ year old modeling technology the screaming pumpkin did pretty well. Using the good old Marshall models and giving them just enough gain to sound good the screaming pumpkin pushed them even further, even at the lowered drive setting on the pedal. 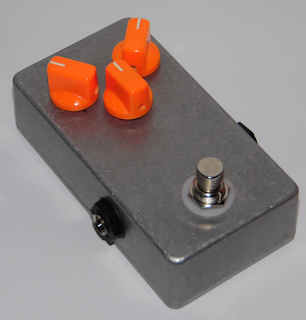