Years ago I ran across a broken, battered copy of Ken Griffey Jr. Presents Major League Baseball, for the Super Nintendo. The poor thing was sitting alone in a bin at the outlet store (you don't say!) and I decided to pick it up and give it a good home. There was a weird rattle, the sides were wrapped in dry rotting duct tape and I could tell something wasn't right with the connecting pins. 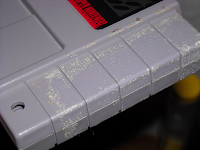 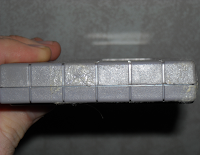 After removing the duct tape I found out that the cartridge was in pretty rough shape. It seems whoever owned this wanted to open it pretty badly and figure out what exactly the rattle inside was, and to be honest so did I. Nearly every edge of the cartridge looked as if they tried to pry it open with a screwdriver, this game was in poor shape!

After using the proper method to open the cartridge, which sadly was only one screw left anyway, I found what was causing the rattle. Apparently this game has a battery backup and the battery had come loose, which is odd because it seems as if this battery had poor connections to the contacts in the first place and was just jarred loose easily. Besides the battery being loose, the contact pins seem to have been gripped with pliers and bend back and forth, luckily they all seem to be there and connected still, but they're not very pretty. 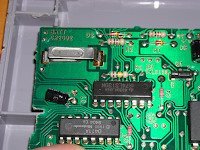 After checking the insides, it was time to work on the sticky duct tape residue. Some Goo-Gone, Q-Tips and some elbow grease (no elbows were harmed in the writing of this blog) and everything turned out quite nicely. Although the cartridge is still very sticky where the residue used to be, there are no visual signs. At least now it looks semi presentable. 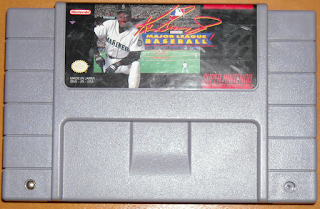 After a few minutes of restoration, surprisingly, the game works, even with the contacts being chewed up as they are. Since I don't currently have any battery holders I just used electrical tape to hold the battery in, which I'll change at another date. The only things that concern me now are the fact that there is only 1 hole for a screw and only one tab at the top to keep the game closed. No big deal, I'll play it anyway! 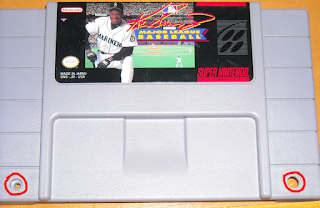