Years ago I wrote an entry about how much I hated the Gran Turismo license tests, and to a degree I still stand behind that entry. Yet, all these years later I can't help but be nostalgic about the series that gave me so many good times, although I won't deny it also gave me many frustrating times too.

Gran Turismo seemingly broke the mold when it came to racing games. Many games up to this point were arcade racers that didn't really come with all the trivial things that true life can throw into the mix. While you did need to have some degree of driving skills, Gran Turismo amplified that and enforced the need to become better. What could have easily been banal, Gran Turismo turned into a whole new genre!

Gran Turismo was one of the only games that I actively talked to friends about, as the Playstation was one of the only systems I actually had while people still gave a shit about it. Armed with my DualShock controller and my Greatest Hits edition of Gran Turismo, I was well educated in the subject when it popped up on the school grounds. Trading cars with friends, learning tuning settings and generally having a lot of fun with the game was exactly what I did in that time, and boy do I miss it.

The sheer depth of customization and tuning were things you never saw before. You could reach back into the NES era with games like RC Pro Am or F1 Built to Win, where you could upgrade parts on the car, but it was all superficial. There was a slight handling difference but nothing changed about the avatar you were controlling. Which is a great deal of what I enjoy about Gran Turismo; even though they did enforce the need to get better, you never really had to fully understand tuning or be an F1 level driver to play the game, enjoy the game and ultimately be good at the game.

It never hurt to do the license tests over and over until you mastered them all, in fact if you did master them all you received hidden rewards cars for your efforts. Again, I absolutely hated and dreaded a lot of those tests. What made sense under normal racing conditions was never allowed in the test, which makes no sense to me. I understand they wanted to lay down a strict learning environment, but if I can slide half my tires into the grass to pass someone under normal racing conditions, I may need to do so in the test teaching me how to pass 2 cars racing side by side.

After being overcome with a sense of nostalgia, as well as forgetting whether or not I officially had the exceedingly rare Yellow Dodge Copperhead, I decided to do some good old fashion Gran Turismo racing. After a while I thought to myself I wonder what a more modern Gran Turismo would be like, so I purchased Gran Turismo 5. Hey, I said more modern, I didn't say current day!

After I purchased the game off Amazon the day had finally come to see how a more modern Gran Turismo felt. I was in a more modern era, I was going to play what previously only Forza 2 had offered to me; racing cars in beautiful HD. Upon popping the disc into the PS3 I was greeted with 12 hours of updating. Yep, 12 whole hours that I couldn't use, nor shut down, my PS3 console. Lucky for me, however, the bonus car codes had not been used and, unlike the expiration date on the codes stated, they worked just fine!

Do you know what happened then? I did what any person who just bought a Gran Turismo game would do, I immediately started trying to do the license tests... and quickly became pissed off again! To help me suffer through I took breaks, and mostly learned from my mistakes, but those tests are still fucking awful! Oh, but isn't that just the greatest thing? They never eased up and they instill a strict learning environment, which brings all that nostalgia rushing back once more. I love you Gran Turismo! 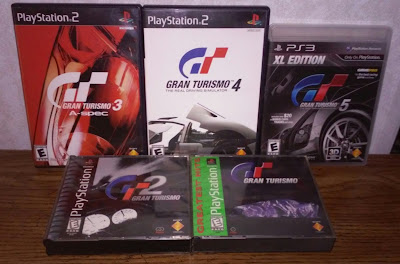