As a thrift store shopper I have a fairly unique opportunity to find cheap electronics and give them a thorough testing. Sometimes these electronics are good and sometimes they're bad. In the case of the Snakebyte wired PS3 controller I can't say that it's good, but I wouldn't write it off as being completely bad either. The Snakebyte wired PS3 controller just kind of... exists. 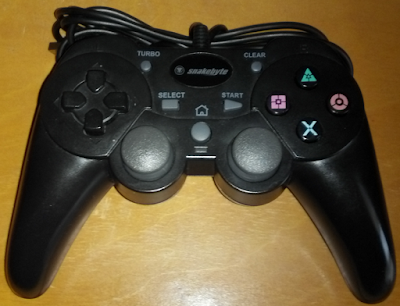 My original intent was to use the controller as a PC controller, which you absolutely can do. I saw it as a wired Dualshock style controller and figured I would give it a chance. The fact that it works on PC is great! It's simply just a plug and play scenario where you plug it in, Windows finds the drivers automatically, and without hassle, then you configure it through whatever game you wish to play. It's truly that simple.

Though I may praise it's simplicity in connectivity to the PC, the Snakebyte isn't without its flaws. All of the action buttons are analog, which I found quite surprising, but the particular nightmare here are the should buttons. Sometimes the weirdly designed L2 and R2 buttons don't register and even though they are analog it's far less sensitive than the official Dualshock 3. Whatever they were thinking when they decided to design them differently from the Dualshock 3 triggers, I don't know, but in either case these L2 and R2 buttons are this controller major downfall.

Another issue you may find with the controller, albeit not as bad as my previous gripe, is the analog sticks. Firstly the texture on them is very shallow and harder than the rubber on the Dualshock 3, making them much more difficult to keep your thumbs on. Secondly is the dead zone which feels like you could fit a complete Dualshock 3 controller in. This makes precision use of the analog sticks nearly impossible.

The overall build quality is decent with a firm and rigid plastic shell. The design takes a slight departure from the standard Dualshock form factor and offers elongated handles that I don't care very much for nor do I find very comfortable, but it's not horrible. The controller also offers customizable turbo functionality, while also including a clear function to undo turbo assignment. Finally the cable seems to be quite a long one; no complaints about having to sit right beside the console while using this controller.

If I'm playing a game where precision isn't a necessity the Snakebyte controller is useful, otherwise not so much. I've played Fallout and Skyrim with the Snakebyte and I've done just fine, but as far as racing games, where the analog really is required, the controller falls flat.
Posted at 3:00 AM 0 comments