How far is a tech-nerd, gamer willing to go?

Well I am willing to go pretty damn far, to be honest. The story starts with me at the outlet store today, digging through a random bin when I happen upon a broken Game Boy Color back. Shortly after I found the main board, with everything attached, and the front of the shell, which was in absolutely shit condition.

I spent a good 15 minutes, or more, hunting down the tiny little buttons, silicone pads and anything else I thought I would need to rebuild the system. I managed to find everything except the IR cover, which really isn't that big of a deal. Short of the IR cover, and the broken shell that I decided to leave behind, I found everything I would need to make a whole other GBC. 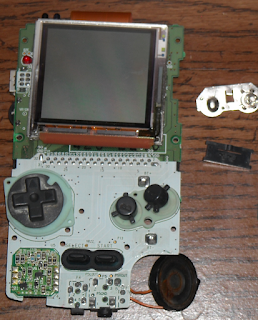 Lucky for my teal GBC, which I happened to purchase from the same outlet store a year ago, this one was the same color and still had the battery cover. The original battery cover for my teal GBC snapped at the clip part that goes into the system, for some unknown reason. I had been keeping an eye out for a battery door for it, sadly I only managed to find a atomic purple one, which was a place holder until today. 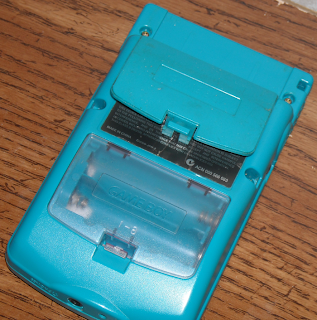 After getting everything home, I test fitted it in a spare lime shell that I have and found out there were two issues I had to overcome before having a fully functional GBC. Short of needing a brand new shell and all the screws that come with it, I need to replace the speaker, because this one just doesn't make much noise. Secondly, the power switch had snapped off, which seems to be a major issue, but I'm sure I'll figure out how to fix that.

I already own a handful of Nintendo Game Boy Colors, so when I pick a shell it will be the first one of that color I'll own. I'm hoping for something cool, custom and non OEM. I'll just have to see what I can find, and hopefully keep it updated here.
Posted at 9:12 PM 0 comments

It was Friday, I was in the outlet store when I saw the knobs peaking out from under a large white mass. I moved over quickly to see what it was when I noticed it was a miniature guitar amp. Excited by my find I tossed it in the bag and kept on about my hunting.

After the first round I made the purchase and went outside to do some research. With very little information about these amps I went to Google Images and saw that this little amp had a twin speaker cabinet that it should sit atop. Normally if there is a part to a set of something or any given item is missing a piece, at the outlet store, its more than likely nowhere to be found, but luck was on my side!

Mere minutes before the bin I found the amp in was about to be pushed back to make way for fresh new "junk", I walk up and quickly found the speaker cabinet. The day carried on in a good way, as I found quite a few more things, but the excitement of finding this micro stack never left my mind. Sadly it would have to wait until I got it back home to give it a good and thorough testing. 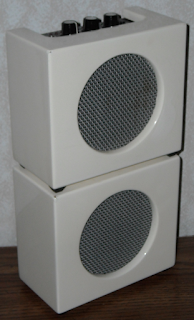 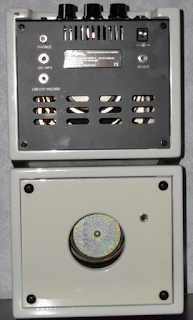 Once I got it home I plugged it in and wasn't too surprised about the sound, shitty. Its a neat little discussion piece, but its not really all that fuctional, due in LARGE part to the cheap, flabby speakers they tossed into this thing. Original MSRP was $129.99 and probably sold at around $75 to $100 (?), if that were the case whoever bought one of these were seriously ripped off.

Fast forward to today, while doing research on other mini amps, when I came across the Orange Crush Micro. Orange is world renown for making high end (expensive as fuck) amps. Although I've never played one, let alone owned one, I do have to say I at least love all the orange!

But wait a second, that Orange Crush Micro looks suspiciously like the Lyon Amp3. Although they're not an exact copy I have to say the backs look very similar, the built-in tuner is the exact same and the battery door placement is quite similar as well; could these have came from the same factory? The Orange Crush Micro says "Made in PRC", obviously People's Republic of China, and the Lyon Amp3 simply says Made in China, this is getting interesting! 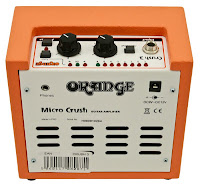 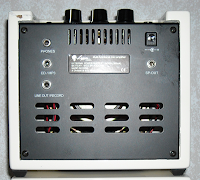 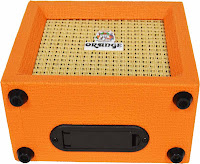 This gives me hope that the internal components are the exact same and with a few tweaks, and possibly a speaker upgrade, I could have a really sweet micro amp stack. Then again maybe I'm just jumping the gun here, the Orange Crush Micro and Lyon could be completely different inside, other than the obviously different face layout. Regardless they sure as hell don't hold the same prestige, or even sound close to one another.

The Lyon Amp3 isn't terrible, but I absolutely can not stand the synthesized farting that this speaker produces under mid-gain settings. This little amp may be able to produce pretty good tones, but until I can find a better alternative for the speakers its all farts from here. I did manage to get a pretty chimey clean out of it, but that was all guitar volume control.
Posted at 8:31 PM 0 comments