The day has come. I was out thrifting at a local Salvation Army and there it was. Its bright blue shell beckoning my gaze to it, as it sat half visible in the glass case among a sea of bland, grey items. My 3DS XL. I think it's time I write a followup to the my 2DS experience post.


Now, I need to explain a little bit here, so bear with me. I was gifted my 2DS on Christmas eve 2015 and I had written that entry back in November, in anticipation for posting it on Christmas eve 2017. As things go, the holidays came and went and I had totally forgotten about it until I recently, literally three days ago, bought my 3DS XL. That's why it was posted in March, the same day as this article.

I can't deny that I was excited to find a 3DS XL, but nearly everything I said in the 2DS experience post still holds true. I emphasize nearly because two things about the 3DS XL really do stand out for me, but I'll get into that in a little bit. Obviously this one has been well used and is slightly beat up, but on the first day of owning it I gave it a thorough cleaning and inspection to see how well it had stood up to being used. As per usual with acquiring used electronics I also formatted the memory and setup a new 3DS account on the console. After cleaning the screens and clearing something crunchy from the right bumper button everything worked fine.


What blew me away about the 3DS XL? The first thing I noticed was the sound, which is pretty amazing, I won't even lie. The 2DS only has mono, but even after comparing them side by side it doesn't make me hate the mono sound of the 2DS. It's not terrible by any means, it's just not the stereo the 3DS XL offers. I could take it or leave it, the mono is fine, but the stereo is just slightly more appealing.

The second feature that blew me away was the screens and just how big, vibrant and beautiful they are. Sadly I've had to change the screen in my 2DS, perhaps that's a check mark for the hinge crowd, and the aftermarket screen isn't as vibrant, but even so I still know what is what and I can still play all my games on my 2DS. After the side by side comparison, even with the sound difference and the complete difference in screen sizes and vibrancy, nothing has changed my mind on my love and adoration for my 2DS.

What did I not like about the 3DS XL? Well, it's the elephant in the room now isn't it? The fucking hinges! What I find exceedingly frustrating is that I have owned my 3DS XL for only three days and within that time I've noticed hairline fractures forming in the right side hinge. During the initial inspection and cleaning, the first day I owned it, I took a good look in the sunlight and noticed a few small cracks, nothing major but there were a few. A whole two days later I'm noticing brand new ones forming. Nothing seems to be flexing or popping out of place when I open the top, yet, but it's only a matter of time. I can't say enough just how much I hate Nintendo's hinge technology.


Since I ranted about the hinges I guess I'll explain how I feel about the clamshell design. If I was a person who took his 3DS everywhere to collect streetpass stuff, if any of that stuff is still available, I would feel much more secure with a clamshell design to protect the screens from accidentally being bumped into by something or someone, even in my pocket. However, I'm not that type of person and since my 2DS never leaves the house, and if it did I have a fairly rigid carry case for it, I'm perfectly fine with my 2DS. Plus I find the 2DS slab to be far more comfortable than the clamshell design.

Now we get to the namesake of the console and the whole marketing scheme behind its existence, the 3D capability. I'll state it as simply as I can here; the 3D is pretty neat, but you have to stay in one exact spot for it to work. I did some testing in the store just to make sure everything worked and when I first flipped on the 3D it looked like a vomited disarray of pixels on the screen. My eyes adjusted and I moved the console a bit further back and it popped in. If I moved the console any closer, further, left or right everything was, once again, a blurry mess.

Listen, I get it, the 3D was a really cool addition. When it works, it works and it does look really cool, but it's just so darn fidgety. You can turn it off, turn it down, but for the most part I keep it off, and as such that's why I prefer my 2DS. The major thing I would take away from the experience of owning both a 2DS and a 3DS XL is the fact that I heavily prefer my 2DS. Yes I love the stereo sound and I love the big, bold screens of the 3DS XL, but the 2DS is still the most useful of the two for me.
Posted at 1:21 AM 0 comments

Just over two years ago I received a Nintendo 2DS for Christmas from my girlfriend. At that point I didn't have any working DS consoles, but I had a good sized library of DS games that I wanted to play. Originally I thought I would repair one of my broken DS consoles, but the parts just weren't available anymore. That's when I decided it was time I looked into something that not only played my original DS games but would also open my collection up to the 3DS library. I read many reviews and wanted the most bang for my buck, that's why I requested the 2DS.

Reviews seemed fairly positive, but there were some who panned it as a kid's toy and the useless, handicapped brother to the 3DS. Something that struck me as funny though, was that most people who called the 2DS useless were also saying they rarely used the 3D capability of their 3DS. If I'm not mistaking, doesn't that make their 3DS a 2DS with hinges?

That leads us into one of the major reasons why I wanted a 2DS; the fact that the 2DS doesn't have hinges to break. It could go without saying, but throughout the life of the DS family, Nintendo never could get the hinges right. From my personal experiences seeing used DS family consoles I can say hinges for the original DS were horrible, the DS Lite was horrible, the DSi/XL and original 3DS seem to fair better but still break, but the 3DS XL went straight back to being a broken hinge nightmare. So why would I want to buy a console I know would break because Nintendo never bothered to test and perfect the technology? I wouldn't, and I didn't!

I do enjoy playing DS games on my 2DS, but it wasn't until I actually starting collecting 3DS games that the console really become my favorite handheld. It seems Nintendo took care to make, at least their first party, 3DS games quality, enjoyable and addictive. The console came with a download code for Mario Kart 7, and although it's much of the same from any other Mario Kart it's still great fun. Undeniably the 3DS games look better than the original DS games, but I still don't miss, or need, the 3D capability.

For my personal needs the 2DS was all I needed and all I would need for a while to come. Within the past few years I've acquired a handful of 3DS games and even more DS games to play on the system. I've also managed to acquire a DS and a few DS Lite consoles in rare, unbroken condition, but still the 2DS wins out as my primary console to play DS games.

I'm not saying I wouldn't love to have an original 3DS, a 3DS XL, a New 3DS/XL or even one of the New 2DS XL consoles, because I would. For me it's about simplicity, functionality and not having to worry about the console every time I open and shut the thing and wonder whether it will function the same way again. Hopefully soon I'll find an original 3DS to at least see if the 3D capability is as horrible as people say it is, regardless the 2DS still remains all I currently need. 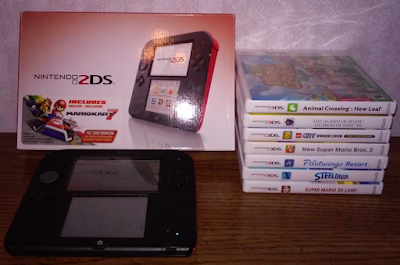