Ibanez and DiMarzio seem to be a match made in guitar heaven. There's just something about seeing an Ibanez and those hex pole pieces together that clicks the word Quality in the old noggin. For years I wanted to upgrade my stock (or more accurately weak as fuck) Ibanez RG270DX Powersound pickups and make it look like a high end Ibanez without paying the DiMarzio price. That's where the overly bountiful manufacturers selling on Amazon are coming into play; making pickups that look the part without having to pay the part.

You may have read that previously I was looking for pickups for my Washburn A20, which didn't turn out as well as I had hoped. Before those pickups arrived, and I realized what a mistake they were, I had thoroughly chomped on the bullet and bought this set of Yibuy pickups. They're all black, which was exactly what I was looking for in this application, have hex pole pieces and they even have four conductor wires, but most importantly they were cheap. 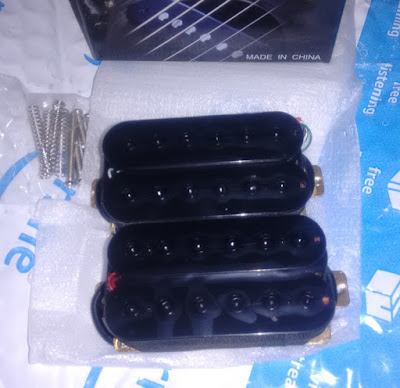 The listing boasted these pickups were ceramic magnets and the DC resistance of the bridge was 14.5k (7.2k split) and the neck was 7.8k (3.9k split). This all sounded great to me, as the stock Powersounds were lacking power, but there was no short supply of sound, err noise. When these pickups arrived they came in a nice little box, carefully wrapped together and everything looked perfectly fine. So this time there were absolutely no complaints.

After removing the chrome pickups, I installed for testing purposes, the Yibuy pickups were installed. Something I had forgotten was just how obsessed I was with having owned an LTD SC-207 and having to return it a week later (to Guitard Center - sound it out to get the pun) because the neck was twisted like a candy candy stripe. This meant I bought a 7 string set of strings and setup my Ibanez to be tuned B to B. How would these pickups respond? Well, poorly at first. It took some tweaking and adjusting to get everything where I wanted but after some fiddling these pickups really surprised me. 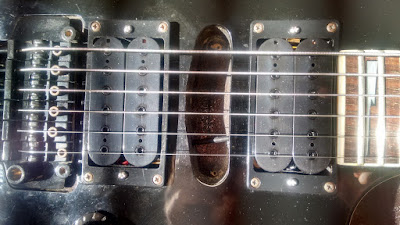 I won't say these compare to DiMarzio pickups, but I will say these are leaps, bounds and light years ahead of the Powersound pickups, and probably better than the Ibanez Infinity pickups that looks like DiMarzio pickups. What's going on under the hood, I can't say for sure but I can say once I adjusted them to where I liked them these things are pretty amazing.

At first I was a little worried about the lack of any wiring diagram, but I quickly found out these wire up like a Seymour Duncan. For the price and time invested, no I wouldn't compare them head to head with DiMarzio, but I would say they're leaps and bounds better than the old stock pickups, which was the only requirement I had of them. My only real complaints would be that the bobbins are shiny, unlike DiMarzio, and the height adjustment screws are bigger and the rings will need adjusted. To be honest I'm already planning to buy another set of Yibuy pickups. I was honestly that impressed with them.
Posted at 12:11 AM 0 comments