Making Connections and Persistence Pays Off!

All the way back in the year 2010, yes when dinosaurs roamed the Earth, I started my hardcore video game collecting. I had always collected video games on the odd occasion, but it was that year that I decided to make it a full on pastime. Along the journey I made friends at most of the thrift stores, as well as a handful of enemies, all of whom were employees of those stores.

From assistant managers who helped me find games from stock that had just come in, to managers who hated me because they didn't understand why I wanted them to change the price of common NES games from $20 to a more reasonable $3. Many fights were had, but mostly the visits to thrift stores were filled with either overjoyed scores or empty handed defeats, both of which were all part of the hobby.

One such occasion of being nice to store employees paying dividends I walked in on an assistant manager, whom I often spoke with, trying to get a Nintendo Gamecube to work because the lid wouldn't shut. Fearing the console was doomed to be trashed, I threw out the an offered of $5 (to my recollection), which he accepted. For a product he thought was trash his store was now $5 richer, and for about 15 minutes of work I gained a perfectly good Nintendo Gamecube, complete with power and video connectors.

I was also given steep discounts on items that just sat in the store, or display case, for extended periods of time. Eight NES controllers for 80 cents (total for all 8), SNES games at 25 cents each, a shoe box full of Atari 2600 games for $3, the list goes on and on. Sometimes the employees would even try to hold things back for me, and the manager would always put things out behind their backs. Although their efforts were appreciated I wouldn't want to score things this was, I prefer the thrill of finding the items on the shelves myself.

Salvation Army used to have a bric-a-brac section atop all of their clothes racks, which often yielded goodies such as a Gameboy Color for 59 cents, countless N64 games for 39 cents, among many other things. The perk of frequently going to the same places, regardless of finding anything or not, was that the employees saw me and knew I was in there quite often; even if we didn't build up a personal report they knew who I was. This meant when one Salvation Army store was given someone's nearly entire NES collection, I had a bargaining chip to get the games even cheaper.

The year was 2011 and the selection was vast! Someone had taken very good care of their NES games and I would say nearly all of them had their manuals and were kept exceedingly clean inside black Nintendo game sleeves. I knew I couldn't afford all the games I wanted at the price they were asking, which was only $3, so I went to the manager and asked him for a discount. He recognized me, although we had never spoken before, and after explaining that I usually find games for anywhere from 39 cents to $1 he told me that if I bought more than 10 I could get them for $1 each. SCORE!!

I quickly shoveled about 20 NES games off the shelves and into a cart. Back then I didn't have the ability to quickly and easily verify what games were worth what, nor did I have the ability to readily remember which ones I already had, so I had to go on instinct. Along some enjoyable filler titles like Donkey Kong Jr. and Popeye, I picked up Ninja Gaiden 3 with its manual as well as Chip n Dale's Rescue Rangers 2, also with its manual. All for $1 each, in mint condition and with a pristine Nintendo game sleeve.

Another case was at another Salvation Army store, where I saw a box with an N64 and PSone console and various video game things inside without any prices on anything within the box. After asking an employee, she quickly called over the manager, and after a short haggle I ended up getting the box full of video game goodness for $10. This would turn out to be my modded PSone, that I had no clue was modded at the time, as well as give me my copy of Mario Kart 64, which I played the hell out of for the following few months,

However, further interactions with that same manager didn't go as smoothly as this occasion. There was a time I asked him about a bare bones SNES console sitting in the electronics section of the store the was priced at $30, which I thought the price of the week made it 50% off. Without even looking at the price tag he wanted to charge me $50! Needless to say I walked out empty handed, laughing that he had raised the price $20 without even looking at the price right on the item itself.

The moral of the story here is to be friendly and build those connections. Of course you're not going to be the only one using this tactic, but stay persistent and eventually you'll have the edge. Nothing is more important than being kind, courteous, persistent and frequenting those places, being seen buying the things you're after and maybe even without your input employees will start to help you find those things as well.
Posted at 4:04 PM 0 comments

When Two Become One, and the Leftovers Become Something Else.

Recently I found a rather beaten and worn Nintendo DS. The poor thing looks like it's been through a war, and it may have, but the strange thing is that the hinge is still completely intact. Once I got it home I plugged it in and let it sit for a good, long charge. After it was all good to go I immediately noticed that a few things weren't quite right. 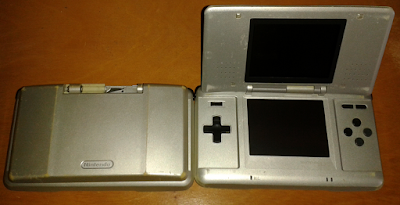 So what am I going to do with this poor thing? I'm going to take the best parts from it and another original DS that I bought years ago (which had a broken hinge) and make a decent, working original DS. After taking them both apart and putting the best of the best within the housing with the good hinge, I finally have a working original DS with a working hinge. By the way, the plastic on the original DS has not aged well. On both consoles I found it to be quite brittle, which is sad and makes me not want to use it out of fear of it breaking, but oh well! 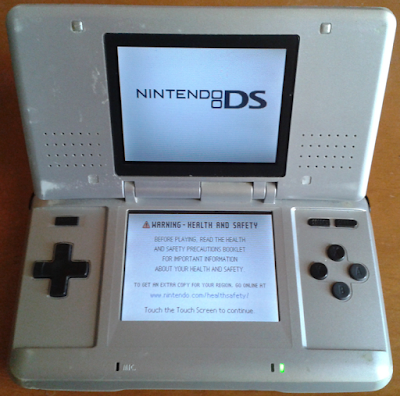 Once everything was said and done I had a pile of leftover parts. What am I going to do with them? Well, years ago an article circulated the internet about someone who converted an original DS into a back lit GBA. That's it! That's what I'll do with the spare parts.

The only real issue here is fitting a resistor beside the Start and Select pads, and making sure there is enough clearance for the whole shell to close up again. The resistor is needed so that the system will allow itself to turn on without the top screen being attached. I was too excited to really take any inner photos or do a tutorial on this, but I may in the future as modding the original DS to be a GBA isn't as well documented as the DS Lite mod. I prefer the original because the GBA games fit flush, unlike the DS Lite where the games hang out slightly.

Mine currently doesn't have speakers, but headphones are just as good. I'll figure out where to mount the speakers and get them all wired up sometime, but for now having a working GBA with a decent, but not great, back lit screen is pretty neat. 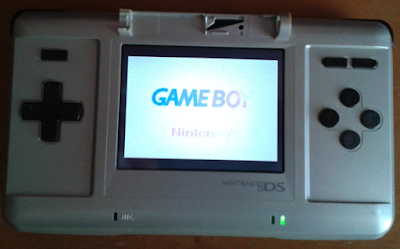