All my life I've lacked patience, I haven't a single solitary drop within any fiber of my being. So after a tense 5 days, which honestly is less than I expected, the OEM Nintendo Wii doors that I ordered have arrived! With a knock on my door, the box slid into my hands and away I went to document the arrival! 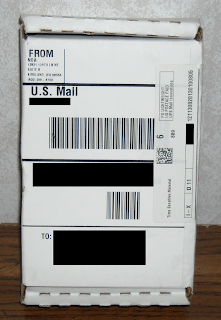 Pretty much the only thing in the box were these nifty Nintendo bags (which I'm keeping!), holding the doors and the packing slip. I carefully opened the box and bags so I didn't destroy them. Once all was opened I packed the bags back into the packing slip and put them back in the box. OCD anyone? 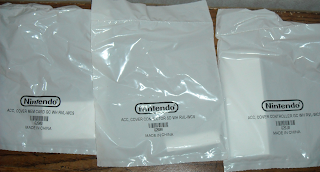 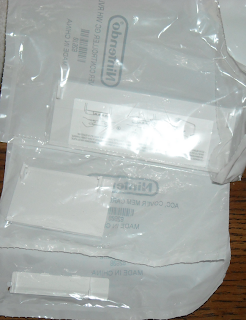 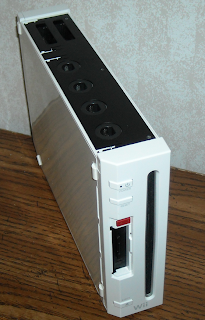 And so we see that the poor beat up Nintendo Wii that I salvaged from the Goodwill outlet store bins is now almost whole again! The face is still a bit loose, but it stays in place and I never have reason to grab it by the face, so I won't worry about that. All I need now is an official controller and IR bar and everything will be perfect! 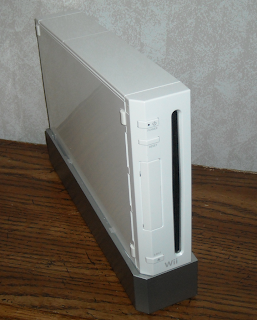 A Man and His Gamecube!

A few months ago I was fortunate enough to get myself a handful of loose Gamecube games, as my outlet store nemesis can't be bothered to look inside something which I don't care to give away on my blog. BWAHAHA! Anyway.. For mere pocket change I've picked up Mario Kart Double Dash with the bonus disc, Mario Superstar Baseball and Need for Speed Carbon, the last of which will be the main focus for this entry. Again, they're all loose but I've learned to use my small Gamecube disc carrying case.

For years I've had a non-working copy of Mario Kart Double Dash, sans the instructions, since the working copy came with the bonus disc what was I suppose to do with the original, single disc case? This is a job for one of the numerous random empty Gamecube cases I've found from the outlet store! I took a dual disc case and simply used the Mario Kart Double Dash cover from the original and now have a cased Double Dash with bonus disc.. still sans the instructions. (sad face)

But when it comes to racing games I've always had a place in my heart for the Need for Speed franchise, a franchise that has spanned many years. My introduction to next gen NFS was on the Gamecube when I had Need for Speed Underground, but this was years ago and that copy was sold off to help fund my Xbox habit back in the 2007-2009. I have Underground 2 for the Xbox and had a copy of Most Wanted for the PS2, so I'm familiar with the style of gameplay and the extremely terrible acting scenes they add to make it seem more than it is.

Regardless of my views on the direction they (EA) have decided to take the franchise I've enjoyed every installment, to a point. The cheestastic cut scenes are more like high school drama recitals than anything that could ever be confused for entertainment, let alone acting. But I greatly enjoy being able to freely roam a large, sprawling, open city with lots of different things to discover and explore.

The police chases in Most Wanted, while annoying as all hell, were pretty exciting and you could eventually outrun the cops and find a place to hide. Although fewer in Carbon, the chases seem to last forever and no matter what you do the cop is on your tail, without any sign of freedom no matter where you go. Another thing is that Carbon brings us back to a city where everything leads to the exact same place, where Most Wanted had the illusion of being a few different cities strung along by countless back roads and many ways to get anywhere you needed to be, which all aided in the ability to lose the heat.

To me NFS Carbon feels like one giant leap backwards, when they really should have just expanded upon Most Wanted. Another issue is collecting turf and having to defend it after every single race you do, this can easily be avoided by hitting reset but this shouldn't even be a feature at all! This isn't GTA San Andreas where people actually battle for territory, this is more like rich College kids racing around in daddy's car and trying to stir up weak, contrived bullshit, which is exactly what it is.

When I play a racing game I want just that, racing, and none of this vomit inducing high school drama rejects on large sound stages with 6th grade CGI backgrounds thrown in. We live in the 2000s which means this is a Fast and Furious world, where everyone has a "crew", whether its a bunch of rich college kids on daddy's dime, some rednecks in their Ford "Git-r-Done! trying to be a tuner" Focuses or whatever else it may be, everyone has to have a crew, but not in a fucking video game! Give me a list of cars, a list of upgrades and make me race my car over and over to earn enough money to get those upgrades, thats all I want.
Posted at 9:19 AM 0 comments

Although I often leave my Wii in a state of neglect, that doesn't mean it shouldn't look its best. For the past few months I've debated whether or not I should buy the missing doors for my system, or if they would just get in the way and become nothing more than a waste of money. This sent me on a grand internet goose chase!

The most popular answer seemed to be DX.com or PriceAngels, which I'm sure we're all familiar with the products they sell. I've bought quite a few things from them and were quite pleased with the quality and prices, but the reviews for their replacement Wii door sets left me unsure I even needed them at all. Most of the reviews said the doors fit but were either too stiff or too loose,and aren't as good as OEM doors but do the trick, which made me think I should just forego buying them and leave it be.

A few months passed by when I got the bright idea to check how much a new OEM set from Nintendo would be, so I went to their online store. After navigating to the Wii parts I saw a list of items they had for sale and how much each product cost, yet the doors I needed had no price on them. After clicking the link they gave me the price and option of color (forgetting they've made a red and black Wii as well as white), each part was only $1 each!

DX and PA only wanted $3.70 for their sets, with free shipping. Nintendo wants $1 per part, plus sales tax and a minimum of $2 shipping, so for $5.35 I could get an OEM set that I have greater faith in, or I could save some change and buy the parts that would problem end up broken or removed from the system anyway. Usually I'm an unashamed cheap bastard, but when it comes to OEM vs after market, I'll spring a little bit of spare change toward the OEM parts.

Hopefully they arrive in a timely manner, work as well as OEM parts should and make my Nintendo Wii look more presentable. I try my best to take care of every video game system I own, clean it thoroughly and keep it safe from harm, and my Nintendo Wii is not going to be excluded from that luxury. When I found it the face had been ripped off, and its still loose, but hopefully the replacement doors will restore a little more self worth into a system that really needed it when I found it.
Posted at 9:05 AM 0 comments