Needless to say my first go-round with a Nyko Wand didn't go so smoothly. I chalked that up to having found it at the Goodwill outlet, assuming it was just used and worn out. After acquiring my second Nyko Wand from the outlet store (I'm a glutton for punishment I guess) I've decided that the first Nyko Wand I owned was either a terrible controller from the start, or it saw heavy abuse in it's day, before I mercifully put it out of its misery.

I'm not saying this other Nyko Wand is working wondrously, but at least it works, kind of. The thing looks like it's been sitting in the middle of a highway for a few summers, all ugly and pitiful, but as a Nintendo Wii remote it's a passable option. It works with the games I've tested it with but for some reason it absolutely refuses to work with Netflix. Whether this has something to do with the Netflix app or something within the controller's programming that shuts it off when things load to save on battery power I still don't fully know.

This Nyko Wand is hideous, it's dirty, it seemingly chews through batteries like hot dogs at a July 4th hot dog eating competition, but this one does work. The main feature that I adored about the purple one was that I could turn the controller off at-will by simply clicking the power button really quick, so I didn't need to wait the 3 minutes the official Wii remotes do to shut down. That feature seems to have been removed from this Nyko Wand, although maybe it only works with Netflix, and since this controller doesn't work with Netflix at all I can't see that feature in action, who knows.

This Nyko Wand isn't perfect but it works, coupled with the worn out looking Wii nunchuk I know exactly what I'll be using these things for that won't show off all of their battle scars. But that's for another article, at another time. Something I've been wanting for a while now that I finally found, and I have the perfect controllers to use with it!
Posted at 1:18 AM 0 comments

It never ceases to amaze me, the stuff I run across at the outlet store. Perhaps it's not so much the things I run across but maybe the ideas that deluge my mind when I find these items. Ideas of what they could be used for, outside of their already apparent purpose.

My spare parts box is overflowing with LEDs, something that I often find and even more often wonder why I continue to pick them up, considering I have no immediate use for them. I guess LEDs are always a useful thing to have around, just in case. With so many LEDs I needed a way to test them. It's cumbersome having to hold something to a AA or AAA battery, and 9 volts will almost certainly burn the LED out within seconds, so what is a man to do to make sure he preserves the LEDs but also makes sure they work? 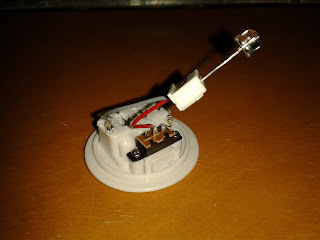 The answer to that came in the form of some weird little contraption I found at the outlet store. I'm completely unsure of what this thing originally was but I found it almost as you see it, only needing some slight modifications. The LED was originally soldered to the resistor and straight to the battery post, which I changed out for a terminal for easy LED placement and removal. 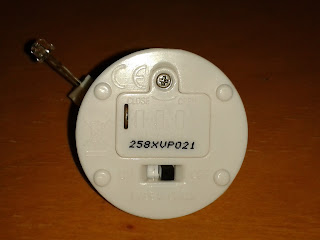 It uses three small, watch style batteries, it already has an on/off switch and a resistor, so it was only a matter of adding the connecting terminal. After an extremely easy swap out the LED tester was ready to test LEDs of all shapes, sizes and colors.

Whatever it's original intended purpose was it's now my LED tester. It's not great, but it does the job. The only oversight I may have had was replacing the batteries, because those small batteries are often expensive. It works for now and maybe sometime in the future I'll find a better alternative.
Posted at 2:23 AM 0 comments

However, there is a little bit of a funny story that goes along with this purchase. I've been conditioned to assume that all wireless mice need some sort of USB dongle to get them to work. I spent quite a while searching for some form of wireless dongle, to no avail. It was only once I came home and poured my goodies out onto my bed that I realized I had forgotten that I had the mouse in my bag when I paid for my items. I quickly went to work trying to find out just how much a wireless dongle would be to get this thing to work. Turns out all it needs is Bluetooth to connect to a computer.

After hooking up the only computer I have that has a built-in Bluetooth connection, I gave the mouse a test. The first thing I notices was just how heavy and unwieldy this thing is with two AA batteries. Couldn't Apple have sprung for a single AA or perhaps AAA batteries? Secondly the wireless Mighty Mouse takes forever to connect, which seems to be a common complaint about this mouse.

Another common complaint about the Might Mouse, both wired and wireless, is the mouse wheel, or in this case ball, didn't work at all, as where the wired version works quite well. I could occasionally get the wireless one to scroll upwards, but never could I get the mouse ball to scroll down, so I went to work on trying to find a way to fix that. After haphazardly skimming through some tutorials on how to clean the Might Mouse, I cracked the thing open and cleaned out the mechanisms that made the thing work, which were quite grimy indeed.

After throwing it back together the roller ball didn't work at all, even the occasional upward was no longer working. Upon opening the mouse again I found that the ribbon cable wasn't attached properly, and once it was the roller ball worked like new. This time the roller ball tracked very well with very good precision! I also found that the little plastic trim ring around the bottom was essentially broken off and would not snap back in place, as I had hoped. Welp, that's what I get for skimming through the tutorial.

After using the mouse for a while I find that it's just more trouble than it's worth to be a daily mouse, at least for me. The connection takes nearly 2 minutes after the computer has been booted (yes I boot tested the mouse), and it's heavy and harder to control because of the batteries, but otherwise it's a very nice mouse, albeit with fatal flaws.

Where I've grown slightly affectionate toward the wired version, I wholeheartedly can not use the wireless Might Mouse. I've read there may be a single AA version out there, and if I do find it I will pick it up, but I just can't see myself trading in the ability to easily glide across any surface with the lighter, wired version for stumbling across it with a heavy, battery loaded mouse simply for the convenience of it being wireless.

In the video game world it is a semi-well known fact that early versions of Tiger Woods 99 PGA Golf for the original Playstation hold a little bit of a secret. How the secret ended up on the game disc is still a bit of a mystery, yet once it was found by EA they quickly recalled the game and released a patched version. Now, Tiger Woods 99 is a sports title, the bane of many video game collector's existences, which means it's not rare by any means, but the copy with the hidden secret may be a little harder to find than the patched version.

The hidden secret is a file named ZZDUMMY.DAT, which can be watched if the game disc is placed inside a PC. Once the file is opened in a media player, the user will be greeted with the 1995 short film Jesus vs. Santa by the creators of South Park. This short was supposedly requested by FOX executives to pass around as a video Christmas card, in 1995. Again, how and why this file ended up on the game disc are still a bit of a mystery.


So now you may be asking yourself how can you tell the difference between the original Tiger Woods 99 with the secret, and the patched version. A few things to keep in mind are that the SLUS (00785) will never change, at least not between the two versions that I have. What does change is the ISBN and the UPC codes.

If you already own a copy, or run across one in the wild, you'll want to look for the ISBN:0-7845-1503-4 and UPC: 14633-07911. Another issue may be that, due to the used game market, the game may find its way into the wrong case, or it may have no case at all, so always be sure to check the disc as well. Just below the Tiger Woods 99 logo on the disc you will find copyright information followed by the code 791107, which slightly resembles the UPC code.

If for some extremely unfortunate turn of events your disc doesn't have a case, or any front art on the disc, you can pop it into a PC and look at the ZZDUMMY.DAT file to see whether or not your copy is patched. What you'll want to check is the date of the file; if you see Dec 20 1996 you've got the correct Tiger Woods 99. 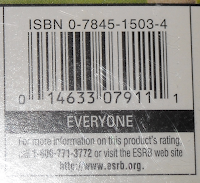 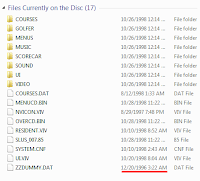 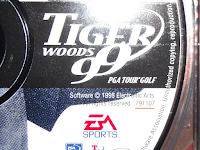 I spent roughly $4 for both of my copies and to be honest I feel as though I spent $4 too much! It's not a rare game, it's probably not even a good game, but the video game oddity collector within myself wanted to own both the original and the patched version. This is nothing more than just one of those extremely weird oddities in the video game industry that made me want to own a game for no other reason than it's silly little history.
Posted at 12:15 AM 0 comments