Recently I decided to start buying parts to restore Rosetta, my abused Washburn A20. I immediately checked Amazon.com and was amazed at the absolute wealth of parts coming in from East Asia. After a few weeks of research, reading tons of reviews and deep self debating over whether I should really buy all these unbranded, exceedingly cheap parts I started biting the bullet one part (or set) at a time.

The most crucial part of any guitar build would be, in my opinion, the pickups. My tonal goal is to get as close to a Les Paul(ish) tone as I can while keeping a vintage look, with a secondary goal of being able to split them with push/pull pots, like a stock A20. Ideally I wanted either chrome covered pickups or a cream on cream DiMarzio style, again like the stock A20 pickups, albeit without the DiMarzio price. However finding humbuckers that fit all these criteria proved difficult to find at anything below a big name brand price.

After reading a lot of positive reviews I settled on a set of chrome covered pickups that were only $12 shipped. I knew they were single conductor, but if the over one hundred reviews were to be believed I figured I couldn't go wrong. Sure, these were Chinese made, but they were coming directly from Amazon, how bad could it get? One word: very!

I wasn't happy with the damage, but I figured at the very worst I could relic them and make them look old and well used, so all hope was not completely lost. In my optimistic haste I asked Amazon if I could get a partial refund and keep them, as I still had hopes for them, which sealed my fate of ownership. The only guitar that I could test these in was my Ibanez RG, being the only guitar that was fully ready and had a humbucker neck route. After installing them I plugged into my Fender Mustang Mini and everything sounded really nice. The tone was full and bright, but it wasn't until I had the chance to plug into my half stack and crank the volume that things started to fall apart and fall apart quickly.


The listing said the neck would be 9k resistance and the bridge would be 16k, but when I checked them the neck was 13k and the bridge was flip-flopping between 12.5-12.8k, I decided to install them anyways. Almost immediately there was feedback from the pickups. All but the outside of the covers were covered in wax. How could these things NOT be potted!? So now not only are they dented, they're microphonic and trying to dial in anything that wasn't complete and utter mud was impossible. I guess that's the difference between a single 6.5" speaker and a closed-back cabinet with four 12" speakers.

After removing these pickups from the RG I noticed the cover for the bridge pickup was rattling, I'm assuming it had broken loose in the fall that caused the damage on the front. After carefully prying the cover off I noticed absolutely no wax whatsoever between the cover and the pickup itself. However, I also noticed the pickup was actually black and cream, which isn't my ideal color combo but it's better than the black on black I assumed it would be. The fun discoveries didn't stop there as I could clearly see where the two coils were connected, giving me hope I could split that, extend the wire and make this pickup a four conductor pickup, maybe. I later took the cover off the neck pickup and found essentially the same, no wax whatsoever to be found anywhere within the cover or on the faces of the bobbins, but this time the pickup was black and white. Not exactly what I wanted, but still not boring black on black. 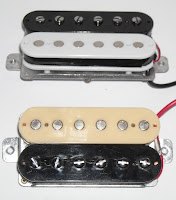 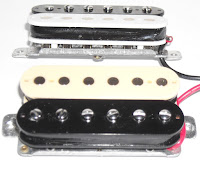 There are so many things I can do with these pickups, so maybe my optimism wasn't completely wrong, but the initial feeling about these picks was that I had been screwed over hard. Maybe I can split the coils and make it a four conductor like I wanted. Maybe these pickups are a lot better open coil or properly potted with the covers back on them. Maybe! I guess it's just time for me to see what I can make of them and how they sound without the covers on them. As soon as I have a chance to check them out and if I ever put the covers back on them properly I'll make sure to add an update to this, but for now I truly wished I had sent them back and gotten a refund. Then again, maybe these things could be the best pickups $6 (after partial refund) have ever paid for. Oops, there goes my optimism again!

As things tend to do, my eleven year old Logitech mouse finally gave up the ghost about a month ago. My only backup choices were one of my Apple Mighty Mouses (Mice?) but my laptop doesn't have bluetooth for the wireless version, and the wired version's cable is too stiff for me to use comfortably. My last option was a Microsoft Explorer Touch wireless mouse I had picked up from Goodwill three years ago. My only initial concern was, like the wireless Mighty Mouse, I didn't want something that chewed through batteries at an alarming rate. 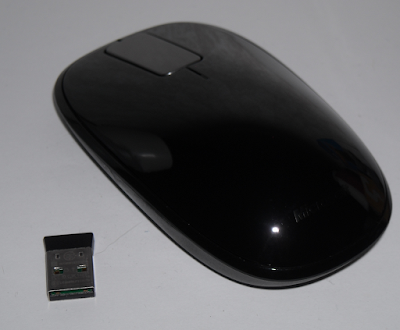 I couldn't care less about how sleek the design is, although it is pretty sleek, I just needed a functional mouse. After tracking it down in my old laptop bag, I plugged in the dongle and almost immediately everything was ready to go. Straight away I noticed just how much smoother and better the DPI was with this mouse. It was comfortable in my hand, and since there was no wire to get tangled, it was far better than what I used for just over a decade. What could go wrong?

After about a week I noticed hand gunk accumulating on the, formerly, shiny black plastic of the Explorer Touch. Then I noticed all the gunk building up in the open crevasses along the top of the mouse. But by far the worst offense from this mouse is that the mouse wheel is touch sensitive, rather than any actual wheel, making it nearly impossible to use because of the buildup. Anyone who uses a mouse often will understand that skin oils and dead cells are just a natural situation, so there isn't much I could do to avoid this issue. 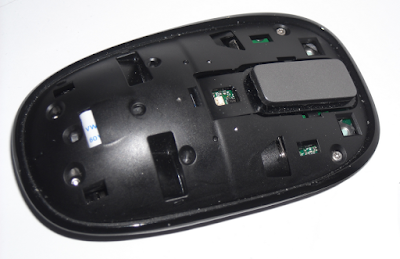 The final fault for this mouse is just how easy it is to lose the dongle. The dongle is suppose to have a kind of push in and push out mechanism on the bottom of the mouse that doesn't work very well anymore. Luckily mine was always in a laptop bag, but the dongle could easily slip out and disappear, rendering the whole thing useless.

One of the things that surprised me about the Explorer Touch, beyond having better DPI than my old mouse, was the battery life. I've accidentally left it on many times overnight and the batteries that it came with, over three years ago, worked for a few weeks.

I don't love this mouse, but it functions smoother and better than my old mouse. If only there was an actual wheel in the center and it didn't have gigantic crevasses for hand gunk to get down into and need cleaned out this mouse would be perfect, instead it's just usable.
Posted at 4:56 PM 0 comments

Clip-on tuners have been a thing for a while, and as a guitarist I had been wanting one. Of course they're much cheaper now that everyone makes them, but as with all new pieces of technology they weren't always accessible to the cheapo, like myself. That's where my favorite hero, the Goodwill outlet store, comes in handy.

The Tune Tech TT-5 isn't anything flashy or splashy but it does look the part. The clip seems sturdy enough and clamps on quite nicely. The display is bright and bold and it even gives you five tuning options: Guitar, Bass, Violin, Ukulele and Chromatic. 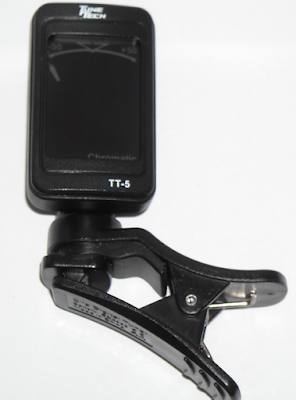 So what's not to like about an inexpensive clip-on tuner? Well firstly even when it's turned off it eats through the battery. I had put a fresh CR2032 battery in it after I purchased it, used it maybe once or twice and put it away, only to find out the next time I needed it that I needed to replace the battery that I had just put in it! Also the battery cover, which appears to be made of Enderman flesh, falls off if even a flea sneezes anywhere within a 200 mile radius. 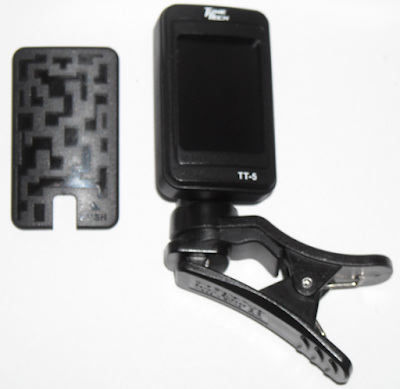 In terms of accuracy I compared the Tune Tech TT-5 to my Korg GA-30 and the TT-5 leaves a tiny smidge to be desired. I'm not saying you'll be miles away from where you need to be, but you probably won't be dead on either. Now someone will undoubtedly be asking "If you have other tuners why would you choose the TT-5 at all?". Simply because it's a clip-on and I don't always have the ability to put a tuner in the chain (I miss my Boss TU-2 so much!). Even so, putting a tuner in the chain means I need to kneel down or go over to my amp to look at the tuner, where as the TT-5 goes wherever I go. 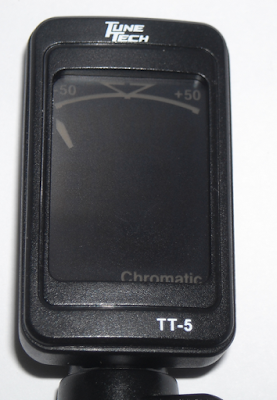 The Tune Tech TT-5 isn't 100% accurate, but it's not far off. It chews through batteries, so after each gig or use it's best to remove the battery entirely and keep them together for the next time you want to use them. And it's probably best suited for someone who is just starting out, or someone at a jam session where you don't need to be completely on point. 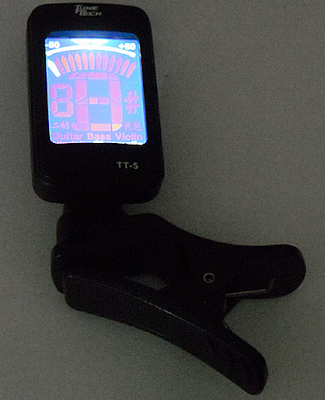 For (current Amazon price) $10 is this thing worth it? I personally don't think so, as companies like Planet Waves, Fender and Snark are cranking out clip-on tuners for about the same price, and you would/should expect better quality from those names. Since I picked mine up dirt cheap (maybe cost me a dime) I'm ok with using it and removing the battery and knowing I'm close enough. I'm not a gigging musician so I don't always expect gig quality results from myself or my gear, sometimes I just like to be close enough. It's up to others to decide whether they want to take the chance on a TT-5, but if given the choice I wouldn't, even though I'll continue to use mine until something better comes along.
Posted at 2:48 PM 0 comments