I tend to collect projects, whether it be my Washburn A20, my Kalamazoo Model 1 or one of the myriad of other projects I have long since forgotten I even have. Lately, however, I've felt a deep, inner push to get things together and finish many of these projects. As I have owned my Kalamazoo Model 1 for almost 7 years I decided it was finally time to finally, and hopefully, let this little bird sing again.

The first process was to change out the power cable. Originally I chopped the end off a PC power cable so that I had a three prong cable, but that proved to be more of a mess than was necessary. After some thinking I decided to try using what is referred to as a "Micky Mouse" style three prong cable, because the end looks a bit like Mickey Mouse, because it would work perfectly in the original strain relief. Sadly progress was halted when I found only the ground is color coded, unlike the PC power cable. After some multimeter continuity checking I sent hot where it needed, neutral where it needed and soldered the ground right back down where I knew ground was suppose to go. 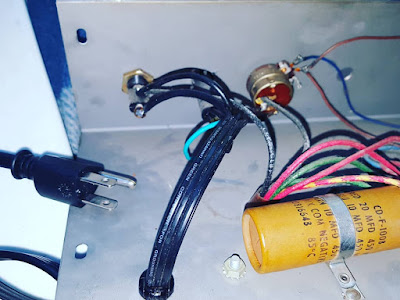 Next was rebuilding the filter capacitor. After I originally tested the amp a few years back, with the PC power cable, I noticed a loud and slowly rising hum. After going to Google I found many old tube amps suffer from this problem due to the filter capacitor. This time around I was confident enough to chop out the old filter capacitor and test it with my component tester. What was suppose to be 20/10/10 microfarad turned into many various nanofarads, one of them was reading 1600nf. Without a doubt this old capacitor was dead and gone.

In my haste to get this amp done I used what I thought would work. 47/33/33 axial capacitors that were all rated for 450 volts, yeah that should work. I arranged them in a triangle, electrical taped them together, hooped the positive leads, connected all the common leads together and placed them in rubber O rings to keep them off the chassis. After all was said and done I soldered the three positive leads to their terminals and I had to create a brand new common ground point for them as the original wire wouldn't reach where the rebuilt capacitor had to go. Afterwards I zip tied everything down and made sure it was snug and secure, but still not touching the chassis.

I have to admit I am fairly proud of how everything came together. Now came the dreaded test. Did I do well? Did I mess up? At first I was slightly disappointed, but once I remembered that you have to wait for tubes to warm up before sounds comes through I was actually quite elated when the sound of my guitar came through without even a hint of hum. I had done it! I had fixed this old amp and given her voice back. 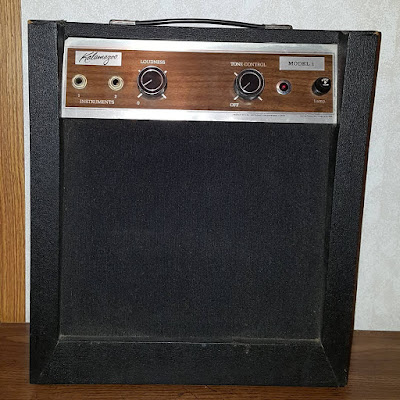 I'm going to finish up here by saying that I'm not a professional solderer, nor are the parts I've used top shelf. Since I've owned this amp for almost 7 years I just wanted this thing to work. I am fully aware I may need to change parts for higher quality parts and do better at soldering later down the road, and I will. For now it's just the desire to finally get this thing back together that dictated how things were done. In the end it all worked out and that, to me, is what matters most right now.

I would like to thank Terry from D-Lab Eletronics and Miles from RRU.com. While any mistakes and poor choices are solely my own, these two have a lot of great information on how to repair Kalamazoo guitar amps and both of their resources helped me greatly in the restoration of my amp.
Posted at 6:52 PM 0 comments