After dickering with a local seller over an orange Nintendo DSi, I grew tired of the BS and decided it would be best if I bought one off Amazon instead. Then I found out the Amazon price (third party seller of course) was three times what the local seller wanted, so I decided to choose another color. Years ago I had found nearly complete boxes for the Metallic Blue and Matte White DSi consoles, so I decided to choose between those two options. Sure the serial numbers don't match, but at least it's something! The choice I made was ultimately the metallic blue, as they seemed to be in much better condition than the matte white DSi consoles everyone else had for sale. 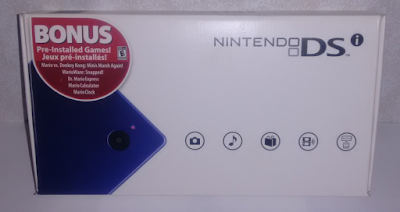 The first thing I noticed about the DSi was that I found its more squared off design to be more comfortable than the rounder edged DS Lite. The functional layout feels the same as the DS Lite, with the exception of the new power and volume buttons. The interactivity of the DSi's operation system was a great discovery as well. Where the DS and Lite were simply insert game or move along types, the DSi had what feels like the precursor to the 3DS interface, as well as the, now deceased, DSi shop and internal memory to install apps.

Now let's discuss, yet again, the DS family hinges. After getting a DSi I think I've figured out the cause of Nintendo's hinge problems. With many of the DS family consoles the internal hinges require a bit more force to snap into place, where as the DSi will slowly glide into fully opened mode and stay there. Along the way you can easily decide at which angle you most want to leave the DSi's top screen open, but the most secure positions are fully open and fully closed, neither of which require much force to lock into. Lately I've noticed my 3DS XL has acquired even more cracks and I'm feeling less and less comfortable using it, but I notice the cracks opening up when I have to force the hinge mechanism to open up or lock into place. 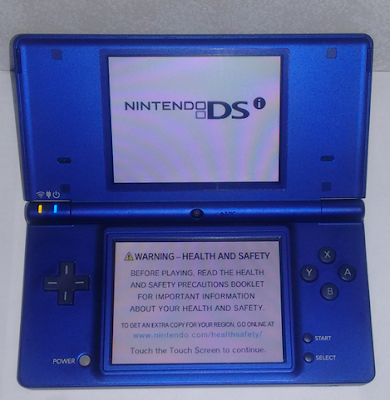 One function that I was surprised that I enjoyed, perhaps more than I should, is the power button. When you press and hold the power button you switch the console on or off. Simply tapping the button works as the precursor to the 3DS family's Home button, albeit the DSi doesn't warn you that you're resetting the software. The good thing is that the power button requires a bit of force to press it, even to reset the software, so I don't foresee accidental resets being much of a problem.

Now, I format newly acquired electronics for a myriad of reasons, but the most important reason is that I want the item to feel fresh and unique to myself, as if I purchased it brand new. With the DSi I decided not to do this, mainly because there were five games installed and with the DSi shop being long since shut down I could never download them again. Secondly the DSi never required a Nintendo account to use the console, meaning I could simply change all the options over to my own and delete everything else within the console that I didn't want or need. Also, because the DSi store is dead there was no risk of me using the previous owner's information to purchase games. 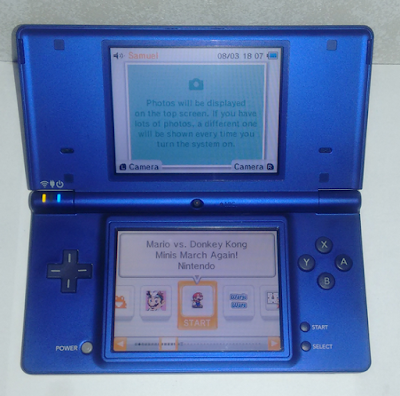 Which leads us into the final chapter, the dead DSi shop. I kind of understand, but not fully, that Nintendo can't keep the DSi shop open forever, but for what it is the shop couldn't have been taking up much bandwidth as an expense. I wish there was a way to acquire the old DSiWare, but those days are gone. I'm glad I have the games I have installed and that I could easily change everything over without needing to format it and lose everything completely.

To be completely honest I was ecstatic with the condition of the DSi I received, which makes me feel a bit bad to admit this, but I prefer to keep it packed away in the mismatched serial number box for its own protection. Since I already have a 2DS and 3DS XL I don't really see much need to keep it out and risk possibly harming it. Still though, I do enjoy the games installed so much that every so often I'll pull the DSi out for short periods of time and give the DSiWare a few good play throughs.
Posted at 4:37 PM 0 comments


About a year ago I was looking for an inexpensive set of headphones that offered noise cancellation but could also do a podcast, so I turned to Amazon to see what I could find. What I settled on were the Panasonic RP-HC200 noise cancelling headphones that seemed to be a good purchase at $27. If you're a return reader to this blog you may find yourself confused right now, as I'm actually reviewing a brand new item instead of a used pair of headphones. Don't worry, that one is coming up later, but for now I'll continue with the brand new pair of headphones for this review. 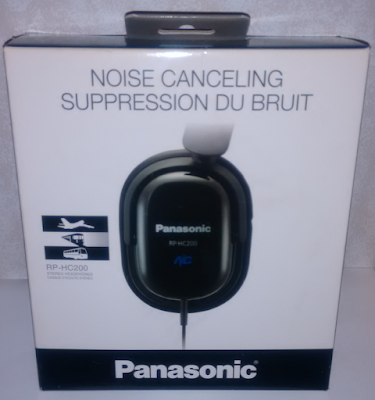 Upon opening the box I was immediately let down as these headphones are not only hardwired, they're hardwired on both sizes. The last four sets of headphones I've had (even the cheapest of which) were all 3.5mm jacks on one side, so if the cable goes bad you've still got a pair of headphones! Bad mark #1. I figured I would still go ahead and give them a try and see how everything went. After putting them on my head I noticed the pressure around my ears was far higher than any of the other headphones I've owned, which later turned into a headache. Bad mark #1.5.

Ok, ok. I bought these headphones based mainly on the fact they were noise cancelling, so I popped in the provided Panasonic battery (go figure!) and checked the quality of that feature. Bad mark #2. It doesn't cancel anything. Now remember these are brand new, so first impressions are factory specs. I could hear the slow change of the speakers as I flipped the switch. The sound was louder, which was already a little bit louder than it needed to be, but I could still hear my fan running from five feet behind me, even through the sound the speakers were emitting. The only thing these headphones cancelled was the joyous hope in my head that I had purchased a quality product. 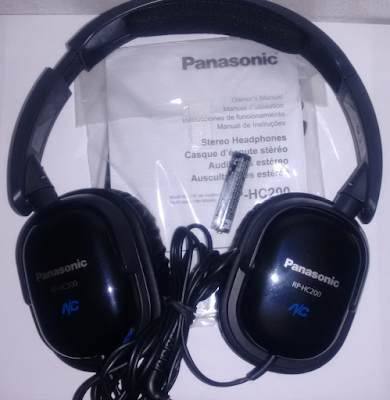 After my TSC NC-3 headphones died I picked up two pair from the outlet store. It's been so many years since the first pair I bought broke down and were tossed away, but I remember the noise cancellation being decent and the ear pieces were so comfortable that I actually kept them for a number of years before having to throw them away because I had no use for them. The second pair I bought were the iSymphony NC1 headphones and they were superb! The middle of the headband detached and they folded into a small compact size. Approximately a year after I started using them the right side earpiece broke off, but I continued to use the left piece as a single over-ear for a few more years.

One thing I can say in favor of these headphones is that the sound is decent and they are loud, and as I said earlier even louder in "noise cancellation" mode. The main reason I bought these was because I wanted another decent set of noise cancelling headphones and these things absolutely don't do any of that. Through all of the headphones I've owned none of them offered such weak and lackluster noise cancellation as the RP-HC200s. If you're looking for a decent set of headphones that will squeeze your head and induce a headache, not cancel any noise other than that of your thoughts and if anything happens to the cable you're completely fucked, then these headphones are the ones for you!