An article or two ago I mentioned that I had a case for Crackdown that was complete, except for the actual game disc. Well after a quick ebay search I tracked down a disc only auction for $3, which was as cheap as I could find a disc only copy. After the game arrived I gave it a good play though, to make sure everything worked, and after I was done I put it in its rightful case. 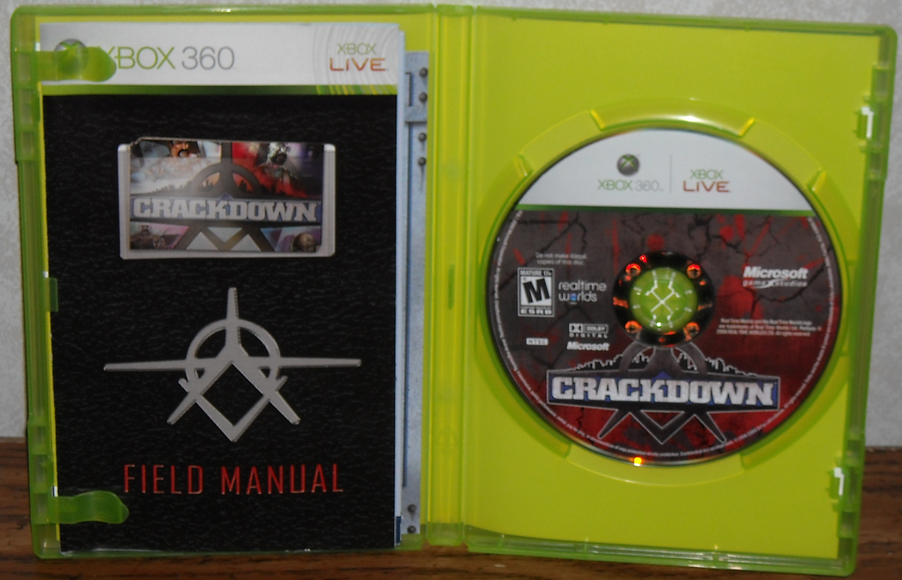 Crackdown was one of the first Xbox 360 games I had ever played, so I've always wanted to get a copy, it just never materialized until now. In Crackdown you play as a super cop, of sorts, and take on crime in an expansive city, rife with area to roam around. As a super cop you have the ability to jump really high, pick up almost anything and essentially pretend you're Robocop.

I'm sure it's well documented on this blog that I love open world games to explore and roam around freely, so Crackdown fits well into that niche. But Crackdown is a bit different in that the city seems to be geared more toward the special jump ability and traveling over rooftops, instead of hopping into a car and just driving from A to B. Which is slightly odd, in Crackdown I strongly loathe driving, as I've always found my ability to bound up and over buildings the more entertaining way to go.

As an initial test for the game I deleted the Demo that had been sitting on my Xbox hard drive for years and started a new game save. As I started playing I was quickly quite frustrated by the game's difficulty; nothing I did seemed to make any progress, and I simply couldn't do anything right. After a few days of frustration I was about to give up, but as I was signing in (this games jargon for loading the save file) I noticed in my haste to get through the initial setup and begin the game, I had set the difficulty on the highest level (Psychotic). After I had rectified this problem I found the game a little bit too easy, but still very much enjoyable.

Crackdown was a fun game, but it only gave me about 4 or 5 days of gameplay. Although its short, and I don't see much replay value in it, the game is still worth a play through. I'm glad I held on to the case when I found it, and I'm glad I found a disc only copy fairly cheap. Now that I've beaten the game it will end up in the stack with the rest of my Xbox 360 games, but this game was well worth the time and money invested, which sadly wasn't much in either direction.
Posted at 1:42 AM 0 comments

Recently I've been trying to track down a Game Genie for both the Sega Genesis and Game Gear on ebay, but I've been outbid on every one so far. While on the hunt I saw an item pop up with an astonishing amount of bids that I never knew was supposedly this valuable. It was an Action Replay for the Nintendo Gamecube and it was at $50 with a few days still to go, which made me recall the time I picked mine up.

It was about a year ago, and I was checking the book bags and backpacks at a local Goodwill when I saw a unique Gamecube bag I hadn't seen before. The item had no price tag, but all the other bags around it said $3.99, so I just assumed this would be the same price. When I opened the case, to make sure the inside wasn't ripped up, I saw an Action Replay disc and memory card sitting in one of the pockets. This little addition pushed any doubt of whether this was worth $4 out of mind and straight into buy mode. 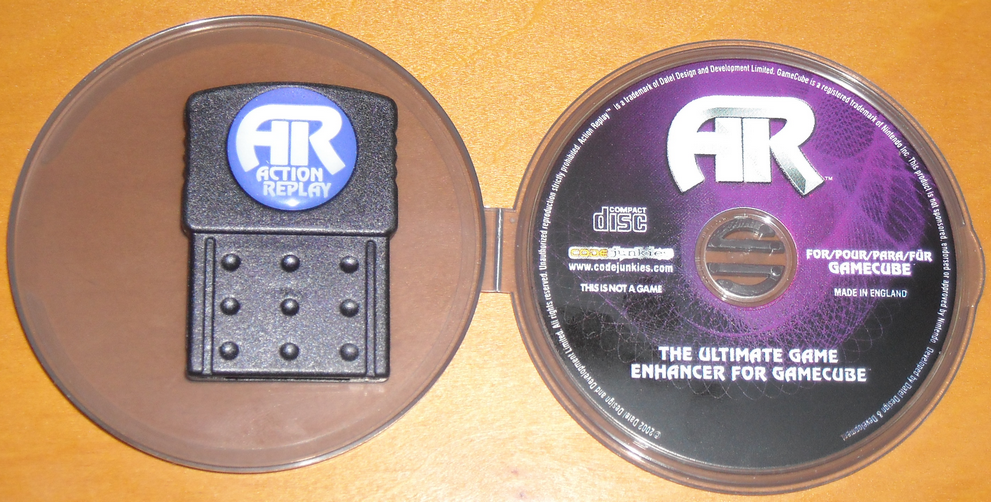 After searching the store for anything else, and coming up empty, I headed for the register. The cashier was new and after I told her there was no price tag on the item, I lent a helping hand by telling her the bags around it were all $3.99. She repudiated my assistance and headed over to the nearest manager. This made me nervous, as I know how money hungry and greedy Goodwill is, they would probably assume I was trying to steal the Action Replay, or charge me an extra $4 for it!

I quickly pulled out my card and gleefully paid my $4 plus tax and walked out of the store, before they could attempt to rectify their mistake. I had never owned an Action Replay for the Gamecube, but once I got it home and used it to unlock a slew of things in Animal Crossing, I was glad I had one now. Although not completely useful to me, I still felt quite lucky to now have it in my armory.

Until recently I had never even given much thought to my Action Replay, I haven't used it much, although it does have a system to allow me to play imports if I so choose. But I just assumed it was maybe a $15-20 value that I picked up for $4, along with a pretty cool Gamecube bag. It turns out, I was off by quite a long ways, more so than I could ever imagine.

Knowing ebay the way I do, I just assumed the $50 bid was someone being a jerk and boosting the bid to the point they were going to win it, or never intended to pay that much for the auction. I took it upon myself to do a little research into what these were currently going for, and what they were actually selling for. Thank you ebay for finally allowing people to see what items actually SOLD for!

The results were still astonishing, astounding and even downright exciting, at least to me. Above are two auctions, obviously the one with a few more things sold for a little bit more, but this is fairly common place for these units. I've seen discs only sell for $60, I couldn't believe it! Not a bad investment, and all I had to do was check the book bags section of a local Goodwill.
Posted at 2:00 PM 0 comments