My Adventures in Guitar Cable Repairs.

Many many moons ago I bought a First Act guitar cable from the outlet store. It felt sturdy and I liked the ends on it, so I knew I was going to purchase it. What does a guitar cable weigh? Not much, and that was the last deciding factor I needed to make the purchase a done deal. 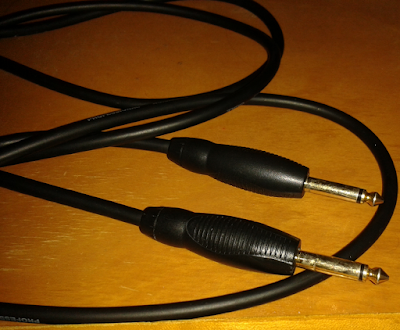 As things go, sometimes cables aren't quite up to scratch, especially First Act brand. What ended up happening to that cable was that one end became bent and dislodged the wires. The ends aren't the high quality, unscrew and solder style, these are molded hard rubber, so fixing this cable would be more of a problem than it would be a solution. I figured maybe in the future I would find a cable with a nice unscrew and solder style plug that I could just buy and replace it with that one.

That day came, a few months ago, when I stumbled upon a really nice, unbranded, tweed wrapped cable that was missing one of its ends. The problem became apparent immediately; I couldn't tear this cable apart to repair a cheap First Act cable. There was no way in hell I was going to ruin a better quality cable, even by an unknown brand, to repair that cable. I, instead, decided to painstakingly repair the First Act cable to its former glory, sort of. 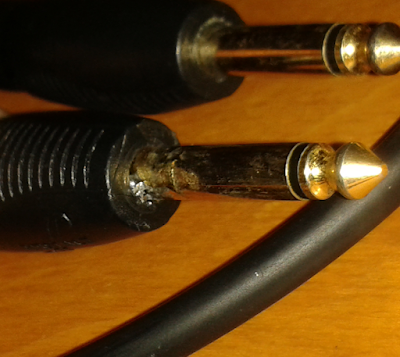 The process was filled with blood, sweat and frustration, literally. I removed the plug from the cable, hollowed out the hardened rubber to allow for the wire to come through, better than it was when it was molded, soldered everything back together and finished by sitting the plug back into the socket. These are not quality parts, the repair is not a quality repair, but the results are exactly what I wanted. The cable now works, and sounds as good as can be expected from a cheap cable, and everything is right with the world again, plus I have a spare guitar cable to use.

Many months went by while using the haphazardly repaired cable and it ended up breaking down from use, again because the ends aren't the unscrew and repair style. What I did end up doing was snipping the end off entirely and soldering on a 90 degree pancake jack end. The quality of the 90 degree jack makes the cable a bit darker, but in works and in the end that's all that matters to me. 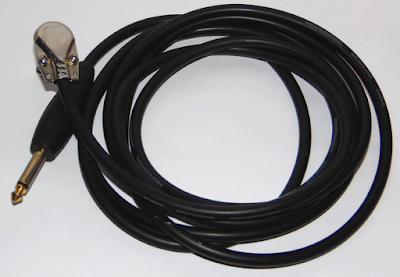 So what was I to do with the tweed cable? Repair it too, of course! At first I was going to buy a Switch Craft brand cable end from Amazon. I wanted to do it right since this is such a nice looking cable. Amazon being the Mega-Douches they can sometimes be won't sell you a $2 (at the time writing this) part without you buying an additional $48 worth of stuff. I would gladly pay the $2 it would cost to ship the damn thing, but nooooooooooooo! So what's a crafty nerd to do? Outlet store, baby! 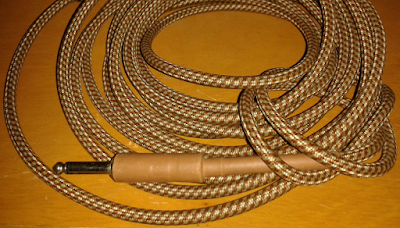 That's right! While at the outlet store I found a weird cable hobbled together with the 6.3mm end I needed connected to two RCA jacks on the other end. I could tell it was homemade because 90% of the project was electrical tape and it took quite some time to tear apart. Once the part I needed was free I put it in my bag and kept shopping. Once I got the item home the project started to come together. 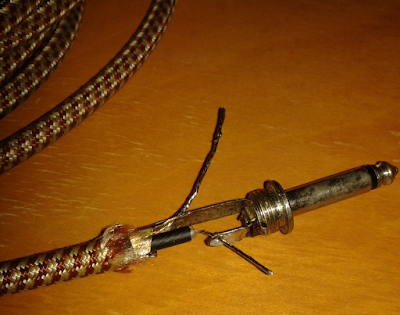 The tweed cable needed to be stripped, wires tinned and the jack needed to be cleaned and prepped for surgery too. The thick, lead solder was a bit rough, but the wires still attached to the jack came free just fine. I'm not sure what brand this jack is but while moving solder around I saw Japan stamped into the metal, so I'm feeling pretty good about the whim on which I decided to pick this jack up.

The original tan shrink wrap had been ripped off with the original jack, and since this jack didn't come with the metal sleeve that screws on and protects everything within, I just decided to solder everything up and wiggle what was left up and over the exposed wires. This is nowhere near ideal, but I'm fine with it, plus I can always repair it later, if the need arises. 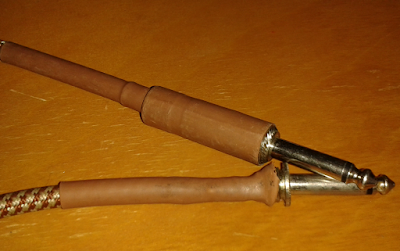 Cheap outlet guitar cable plus cheap outlet parts equals a fun time repairing stuff. Yes, it works just fine, and again I know it's not a perfect repair, but it is a repair. I always feel it's worth the time and effort to repair things I find from the outlet store, especially items I want to have that just need a little extra time and care. I'm hoping to find a proper end sometime in the near future, but then again the tan shrink wrap would still be missing. Either way I'm glad to have two spare guitar cables.

While dealing with the 2020 pandemic I decided to fix up some projects I had left incomplete, the tweed cable being one of many I decided to rectify. I had purchased a smaller cable a few years ago from the Goodwill Outlet store and after a few uses the 6.35mm end started to come loose. It only recently dawned on me that cable would be perfect for parts to make patch cables, as well as using the one piece to fix my tweed cable. As you can see below I used the metal sleeve that screws onto the jack from the other cable to complete this one. I think it turned out pretty nice, covering my horrible soldering work. 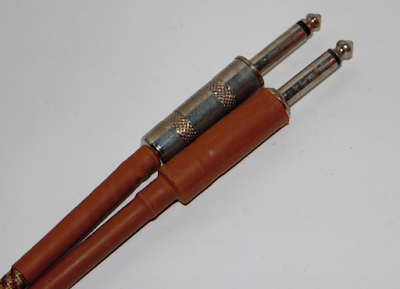