At my age I often look back and get angry with my younger self for thinking we had all the time in the world to accomplish all the things we wanted to do. In my early twenties I wanted to go to luthiery school, an idea that I went so far as to seek out financial aid to make happen, but I never took it seriously. In 2013 I purchased my Kalamazoo Model 1, an amp I have grown more and more enamored with the more I play through it, and waited six years to actually repair it. In the mid-2000s I wanted to start building my own effects pedals after I ran across the BYOC website offering DIY guitar pedals kits at, back then, extremely cheap prices. At the time of writing this there is a three year old draft in my blog account about a DIY ABY box I had planned and even put together, but never once did I actually solder anything inside of it.

Sadly, I feel the time for most of those things has slipped away, but has it? You see, this is the year 2020, a year that has put the world at an almost complete standstill, a year that should teach each and every one of us that the time to do what you want is NOW, and not a day later. At the beginning of the new year I toyed with the idea of building my own guitar pedals, but again I felt I should just put it off and wait, like everything else I've wanted to do. Something within me awoke and  told me I better take charge of that and make it happen before it becomes just another regret. I decided the least I could do was purchase some basic parts from Amazon, such as: LED holders, input/output jacks, potentiometers, knobs, solder-in sockets for component testing and some DPDT foot switches to test true bypass wiring without LEDs.


The next thing I needed to do was find the easiest pedal to build and see if my parts bin had what I needed. After some research I found the Bazz Fuss seemed to be the easiest guitar pedal to build, and my parts bin had pretty much everything I needed, except not the exact same transistor. After throwing the pedal together I tested it out and even though I actually despise Fuzz as an effect I was pretty impressed. After tossing the thing into an old Sucrets tin I decided to call my creation "Fuzzy Throat". 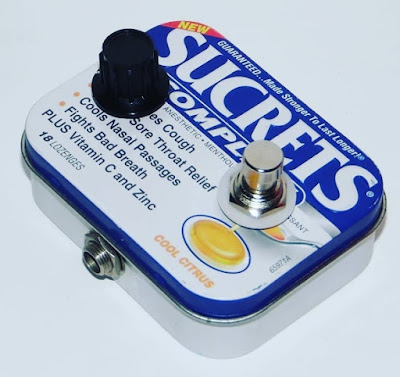 I continued to build a few more Bazz Fuss circuits and none of them sound the exact same. Although all the parts are the same specs, again except the transistor, each component's varying makeup has its own unique way of coloring the signal. This has taught me the importance of trying different types of the same thing to see what happens. A beginner like myself would possibly be blown away by how much of a difference a ceramic capacitor, polyester capacitor or metal film capacitors can make on the overall sound of a pedal circuit.

While fiddling with my Fuzzy Throat pedal I somehow managed to ruin the diode, which turned it into essentially a boost pedal. Before I replaced the diode I played around with it as it was and decided it was time for me to build my first boost pedal. The circuit I ended up settling on was a clone of the Electro-Harmonix LPB-1 pedal. Four resistors, two capacitors and a transistor all put together from the layout I found online and I somehow managed to build an amazing boost that could lower the volume, boost the volume as well as throw my amp into overdrive. Again, I used transistors I had laying around, but the pedal works and I made sure to use sockets so I could swap out transistors.

Although I live with many things in my life I wished I had done, or done earlier, at least I finally managed to build some guitar pedals for myself. I'm also extremely glad that I fixed my Kalamazoo so I could test these pedals through a genuine tube amp. With the world being paused momentarily while we sort through many hardships in the year 2020, I'm glad I finally took the time to try something I had always wanted to do. Now that it's finally started I hope that it doesn't stop any time soon, and I hope this also opens the door to completing other things in my life I've left blowing in the breeze.

Recently I purchased some 1590b style enclosures from Amazon (my first attempts at using real enclosures to house my pedals) and I'm actually quite happy with the results. I had previously purchased a 1590a style enclosure, but since I couldn't build a circuit small enough to fit inside comfortably I decided to just turn it into an A/B line selector. At this point I've created two fuzz pedals, although I'm not finished tinkering with the way I build and modify the circuits so I can get the most out of them, as well as two EHX LPB-1 boost clones and the aforementioned A/B line selector. Once I create a fuzz circuit that I like I will use my final 1590b enclosure for that.