In a previous entry I took it upon myself to repair two guitar cables I had purchased from the Goodwill outlet store. Initially, quick repairs were done just to get them back to being usable, but over time I decided to fix them to a slightly better standard and move on to another type of cable project. With my guitar pedal collection growing from both buying and building my own, I decided that patch cables were something I would soon need. In my own true fashion I decided to purchase a 12 pack of 90 degree pancake ends from China and wait to see what arrived.

Upon arrival I noticed there were two different types in the bag. Three of them had both solder lugs for hot and ground, while the nine remaining only have solder lugs for hot. Of those nine two of them weren't assembled completely, four more were loose and the other three seemed perfectly fine. So this means out of the twelve I purchased only half were immediately usable. With some channel lock style pliers I was able to crimp the remaining half down to a satisfactory level of usefulness. Although I am extremely dubious about their longevity. 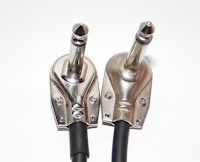 After some thinking I decided to use one of the better pancakes (the left in both above images) to fix my First Act guitar cable and the other two would become my first patch cable. Additional thinking, as well as watching a youtube video demonstrating this technique, gave me the clever idea of soldering the ground directly to the inside of the plugs of the other nine, which actually didn't work at all. My soldering iron could get plenty of heat into the plug (trust me, I know they were hot! ouch!) but the solder just wouldn't stick to the surface for very long. Realizing this wouldn't work on a long-term basis I thought about it a little bit more before I decided to just pinch the ground between the cable and the main body of the pancake end, which actually worked out.

After a few burns, a few choice cuss words and some sweating outside to solder in an open-air environment, all the patch cables were finished. In the end I was able to make five patch cables from what I was supplied. I'm not sure if these things will survive very long, but if they do break down I'll just buy higher quality ends and use the same cables.